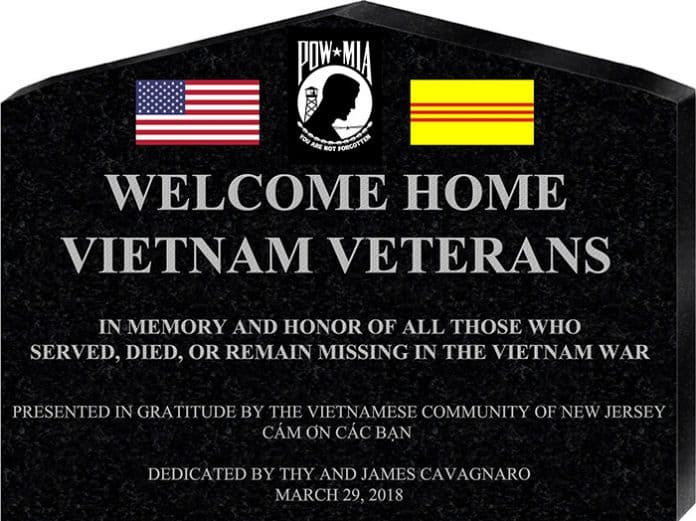 BARNEGAT – All are welcome to the dedication ceremony of Barnegat’s newest monument, which will honor Vietnam veterans.

The dedication ceremony will be held at noon on March 29, which is Vietnam Veterans Day. The monument will be installed at Barnegat’s Gazebo Park at the corner of Route 9 and West Bay Avenue.

The monument is a “thank you” to the men and women who served in the armed forces in Vietnam, paid for entirely by a Vietnamese refugee and her husband, Thy and James Cavagnaro. She was a year old when her family fled in 1975.

She said she decided to give back by funding the creation of this monument, and by hosting regular “thank you” dinners for small groups of Vietnam veterans in town. Thy Cavagnaro said she does not solicit or accept donations for this.

“We would love for as many people to attend as possible, to show our Vietnam veterans how much they’re supported and appreciated. They are the true VIPs of our event,” she said.

There will be many guests in attendance, such as:

After the ceremony, there will be a celebration hosted by the Barnegat American Legion Post No. 232.

Where: Gazebo Park in Barnegat, the intersection of Route 9 and West Bay Avenue.