STAFFORD – The Stafford Township Police Department is counting fewer calls for service, and are measuring the success of the department’s community initiatives in the 2018 Annual Report.

Chief Thomas Dellane presented some of the major findings in the 2018 report at a recent Township Council meeting.

“The Annual Report is a document that the police department began producing in 2017…it’s a document that is intended to provide information to…inform how the tax dollars are being spent, where it’s going to, provide an idea about some of our community initiatives” and crime statistics, said Dellane.

“Every time someone calls the police department and a police officer is dispatched to a call, we generate a case number,” he explained. “However, the amount of time that officers are spending on the call are increasing,” by almost four minutes per call from 2016.

“That is a staggering number,” he added.

There were also 12,649 recorded traffic stops and 3,993 motor vehicle summonses.

Dellane noted the difference between the amount of traffic stops and the amount of summonses issued, stating “we have a very progressive traffic enforcement program here in Stafford…and over the last four years the number of motor vehicle accidents we’re experiencing in Stafford is trending down,” calculating 1,037 MVAs in 2018.

While it has not been confirmed, Dellane attributes the decrease to the excess of construction and road work going on around town.

Breaking it down, those 1,037 accidents are comprised of:

As Dellane noted, these figures have been trending down over the past four years, decreasing from 1,114 in 2015.

This was also the second year in which Stafford participated in the You Text, You Drive, You Pay grant opportunity between April 1-21, 2018. This enforcement detail yielded 22 cell phone summonses and one arrest out of 864 total stops.

Other districted driving campaigns include Click It or Ticket, which ran from May 21-June 3, 2018. This yielded 31 seatbelt summonses and 25 arrests.

As Dellane noted, 2018 saw much fewer calls for service overall, but did mark an increase in the amount of time officers were spending on individual calls. This trend is a result, in part, of the various community policing programs that Stafford Police has taken on within the last few years.

“We have a very robust number of programs here…placing a greater emphasis on de-escalation and trying to work through problems,” such as mental health and substance abuse, said Dellane.

“The focus of law enforcement has changed dramatically over the last 10 years, where we’re still law enforcement, we’re still peacekeepers but there is more of an emphasis on trying to address the social service needs of our community,” he explained.

On POINT addresses issues with mental health, substance abuse, and social services. As the report itself describes it, “police officers restore peace, but they are not sufficiently trained to address the underlying cause of behavioral and mental health issues, therefore, are often forced to respond multiple times to the same address for crisis incidents.”

By combining resources, in 2018, police were able to make 88 referrals to On POINT.

Blue HART: Undertaking a task similar to that of On POINT, the Blue HART program is helping officers save the lives of those plagued with addiction. Blue HART stands for Heroin Addiction Recovery and Treatment.

“This program works directly with municipal police departments and treatment providers to assist Ocean County residents into treatment. Any person who voluntarily requests help with their addiction will receive screening to participate in the program,” according to the report.

In 2018, 32 individuals were processed into treatment facilities in Stafford.

In an effort to incorporate the community more into the policing process, Stafford Police host a Youth Police Academy and Citizens Police Academy.

More for the older crowd, the 2018 Citizens Police Academy invited students 16 and older to participate in an 8-week course at police headquarters. In 2018, 10 students had the opportunity to became familiarized with the Stafford Patrol Division, Traffic Unit, Detective Bureau, Emergency Management, SWAT, K9, and Community Policing.

Stafford Police also hosted a series of family-friendly events to encourage communication with local law enforcement while also teaching kids about things like the dangers of substance abuse, such as:

Following the 2018 shooting at Marjory Stoneman Douglas High School in Florida, many schools, including Stafford’s, began placing retired police officers in all school buildings to provide an added layer of security to students.

“Our SROs’ purpose is to reduce crime and the fear of crime in the school environment, investigate all crimes and police matters on school grounds, provide guidance, instruction, and response within and around the schools, and assisting school staff with maintaining a safe environment,” according to the report.

The Stafford Township Police Department is comprised of 82 employees, 51 of which are sworn officers, serving a community of 28,844 residents and 1,252 registered businesses.

Each year, one officer is named the Police Officer of the Year for demonstrating “a quality work ethic, high degree of professionalism, motivation, dedication, and integrity thus enhancing the police image and who distinguishes themselves within the law enforcement community.” In 2018, this award went to Ptl. Michael Wade.

In addition, the Rick Drappi Award is awarded to a police officer “who has shown unselfish dedication, pride, and concern for others,” according to the report. Named for Patrolman Henry (Rick) Drappi, who lost his life in a motor vehicle accident in 1978, this award was presented to Ptl. Ed Kunder.

Other 2018 awards include the Life Saving Award:

And the Police Excellence Award: 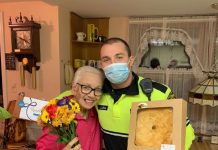