STAFFORD – An inspection throughout the Stafford Township School District has found mold in all of the district’s five schools.

Following the discovery of extensive mold in the McKinley Avenue Elementary School in August, parents in the district called for more comprehensive testing during a special meeting on September 5.

According to Superintendent George Chidiac, school officials and mold specialists from Coastal Environmental Compliance spent the recent weekend inspecting and testing ransom areas in all of the district’s schools.

“[Testing] was done as an extra precaution. But where the experts felt it was needed, mold testing was done and once the results came back, it was recommended we seal off certain classrooms for remediation,” said Chidiac.

They found more areas affected by mold in:

During the September 5 meeting, Chidiac explained that the mold at McKinley was caused by the excessively hot, humid weather.

It has since been discovered that the HVAC system in the school was not functioning properly, which in turn caused the mold to develop. Chidiac noted that the district is looking into fixing or replacing the HVAC system at McKinley with the HVAC company, Johnson Controls.

While McKinley’s mold was formed this way, Chidiac claimed this is not the case for the other schools. He maintains that it was the hot, humid weather that created an ideal environment for the mold to grow.

According to the Ocean County Health Department, there are no set standards for what is safe when it comes to mold. Coastal Environmental’ s Marylee Morinelli said that experts measure the acceptable mold levels indoors against outdoor levels, as they have no specific standard set by the state.

A letter from Cathy Ledden of Coastal Environmental to the parents stated:

“The affected rooms will first be sealed off by using a polyurethane sheeting. Once the area has been sealed, air scrubbers and dehumidifiers will be placed in these areas. The air scrubbers will be utilized by achieve negative air in the rooms, therefore not to contaminate any other part of the school during the cleaning procedures. With all of these measures in place, the school is safe for occupancy during the clean-up procedures. Once cleanup of the mold has been completed, then a second visual inspection will be conducted, along with additional sampling to ensure the affected areas are safe for occupancy.”

Students and staff in affected classrooms have been relocated for the time being.

“We’re fortunate in this district to have room in the buildings that we can maneuver students when necessary,” Chidiac said.

Chidiac explained that he and other district officials are acting based on recommendations from Coastal Environmental, who have recommended not shutting down the schools while they work on remediation.

“In this case, they are not recommending that at all,” he said.

Items found affected by mold, such as furniture and books, have been discarded and will be air scrubbed until results show satisfactory levels, just as was done in McKinley.

Chidiac hopes to see results and have a better understanding of the situation by Friday, September 14.

“We’re being very transparent,” he added, noting that a letter will be sent out notifying parents of the results when complete. “We’re doing the best we can, based on the recommendations of our experts.”

Parents and/or guardians can schedule a meeting with the superintendent to discuss concerns and specifics in the mold cases. Chidiac offers that parents can choose to keep their children home, but it is not necessary.

Concerned parents can get more information at a special meeting set for Wednesday, September 19th at the Stafford Township Arts Center at 6:45 p.m. 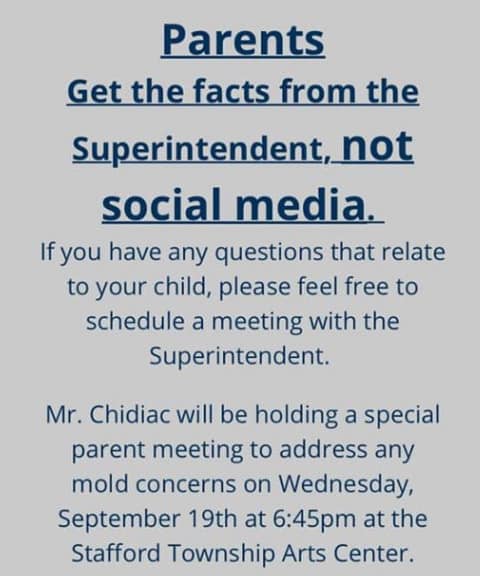