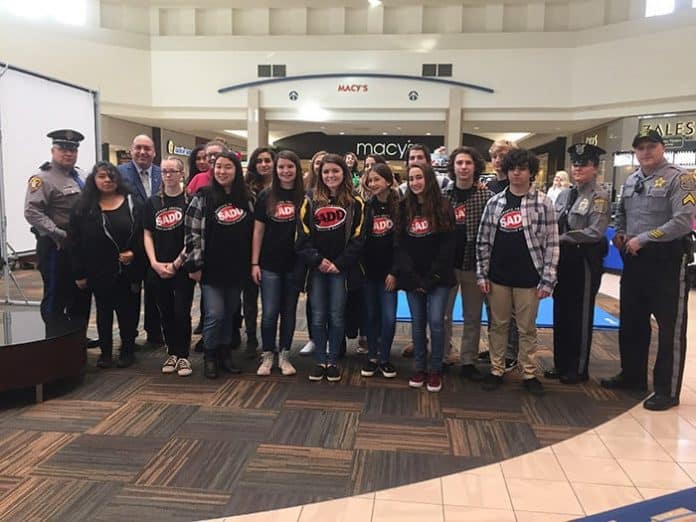 TOMS RIVER – Students from six different high schools got a first-hand look at what impaired driving really looks like after attending the “3-D Drinking, Drugging, Driving: Always a Choice, Never An Accident” event recently held at the Ocean County Mall.

Hosted by the Intoxicated Driver Resource Center, the event incorporated individuals from the Ocean County Health Department, the Ocean County Prosecutor’s Office and local police departments to help educate students about the dangers of impaired driving. The students came from high schools all over Ocean County, including Brick, Jackson, Lacey, Lakewood, and Toms River.

Committeeman Peter Curatolo of Lacey, also the director of Ocean County’s Intoxicated Driver Resource Center, was one of the facilitators of this event.

“We want to take the conviction process out of the government venue,” he said. “We’re trying to impart wisdom and save a life.”

The event was held in the open center of the Ocean County Mall, where representatives from the various departments set up tables with information about the services they provide. Many of the tables also provided the students with free items and information about drugs and alcohol. The Lakewood Police Department had a table full of free notebooks and informative pamphlets, the Ocean County Department of Human Services set up a table with pre-made bags full of pamphlets and booklets for the students to take, and the OCHD even set up an area for blood pressure and glucose testing during the event.

Gym mats and a floor maze were set up for students to try out different types of goggles that simulate what it feels like to be drunk or high on certain drugs. Curatolo explained that the students could try out the “drunk” goggles, marijuana goggles, or event LSD and Molly goggles, to feel how different motor skills are affected by each of these different drugs.

Students lined up to try out the goggles, administered by the police officers. One line of students waited to try catching a ball over a gym mat with the impairing goggles on. An officer would throw the ball from a distance of about 6 or 7 feet and almost no student could successfully catch it with the goggles impairing their motor skills.

Another line of students waited to try walking through a floor maze that simulated driving a winding road; where you could stop at stop signs and swerve for pedestrians and bicyclists. The students that tried this simulation shuffled along slowly, focusing intently on the road and many still failed to successfully make it through the maze without figuratively hitting a pedestrian or swerving off the road.

Curatolo noted that part of this event was also meant to create an opportunity for students to interact with law enforcement in a positive way. Although the purpose of these exercises was to show the students how drugs and alcohol really do have a negative effect on motor skills, the students were enjoying trying on the goggles and interacting with the officers in a comfortable environment.

Assemblyman Brian Rumpf, Director of Administration and Program Development for the Health Department, made a speech on behalf of the Board of Freeholders, noting that Freeholder Director Gerry Little was 100 percent in support of this event, although he could not be in attendance.

As he spoke to the students, Rumpf recalled memories during his time as a defense attorney that were relevant to the topic at hand, noting: “If you do drink alcohol or consume drugs and get behind the wheel, it is not something you’ll forget.”

“Driving is something we take for granted, but it is probably the most dangerous thing we do every day,” said Curatolo.

Curatolo urged the students to never forget that their futures are “worth more than gold,” and to always engage in safe driving practices.

“People’s lives get destroyed,” because of impaired driving, he said.

This point was driven home when special guest Gabe Hurley took the mic to tell his story. The 33-year old Hurley told the story of how he became the victim of a drunken driving accident, and went from being a normal guy with a job and a girlfriend, to a now blind and disfigured “medical miracle.”

“Why would anything bad happen to a guy like me?” he asked himself, describing the sense of invincibility that many teens feel.

Hurley was the victim of a near fatal crash nine years ago, when a group of inebriated teens caused an accident that sent a piece of their car’s engine to go flying through Hurley’s windshield and into his face.

“This is what happens when you combine youth and inexperience behind the wheel,” he said.

Hurley was disfigured and nearly dead when he was placed into a medically-induced coma. He noted that the doctors called him a medical miracle, and it took extensive, hard work to put him back together.

Although he lost his eyesight, his sense of smell, and his face may never look the same as it once did, Hurley said that he is grateful to be alive to tell his story today, if it can help save someone else.

Finishing up the presentations, Prosecutor Joseph Coronato spoke to the students, imparting a few last words of wisdom.

“Go out and speak,” he said. “Convey what you have learned here today.”

He urged the students to understand that tragedy can come out of normal activities, such as driving a car, and to be smart and safe when getting behind the wheel.

“You’re the ones who can make a difference,” he said. 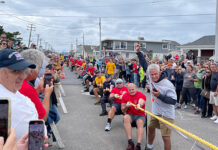 Tug Of War Over Manasquan Inlet Was A Strong Fundraiser 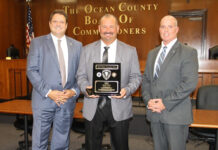