EWING – Despite having problems with the phones on Thursday, NJ101.5 listeners called in all day, mostly in support of hosts Judi Franco and Dennis Malloy, who were off the air after comments made about the State Attorney General, Gurbir Grewal.

The popular midday radio duo released a statement of apology on Thursday, July 26.

“We offer our sincerest apologies to Attorney General Gurbir Grewal as well as the Sikh and Asian communities for a series of insensitive comments we made on our show. For 21 years, the Dennis and Judi show has been unscripted and free form. We use humor and sarcasm to make a point and add color to the broadcast; in this instance, we were off the mark. It was a mistake we both deeply regret. We respect all cultures and beliefs and are deeply sorry for the pain caused to the Sikh community, our co-workers and our beloved listeners,” New Jersey 101.5/WKXW-FM president Ron deCastro said.

Malloy also made a video which was posted this evening on the radio station’s Facebook page, in which he again reiterated his and Judi’s apologies to Grewal, Sikhs and others who may have felt offense at their on-air banter yesterday.

The pair, who host the 10-2 block on the station, have been suspended for 10 days, and won’t return to the airwaves until Aug. 6.

In an on-air conversation July 25, Malloy, not remembering the attorney general’s name, referred to him as “turban man.”

“I’m never going to know his name. I’m just going to say the guy with the turban…and if that offends you then don’t wear the turban and maybe I’ll remember your name,” Malloy said.

Franco followed Malloy’s comments by singing “turban man” and saying that it did not offend her.

Grewal responded via his Twitter account saying, “My name, for the record, is Gurbir Grewal. I’m the 61st Attorney General of NJ. I’m a Sikh American. I have 3 daughters. And yesterday, I told them to turn off the radio.”

Democrat Gov. Phil Murphy weighed in that evening on Twitter.

“Outraged by the abhorrent and xenophobic comments mocking @NewJerseyOAG on The @DennisandJudi Show on @nj1015. Hate speech has no place in NJ, and does not belong on our airwaves. Station management must hold the hosts accountable for these intolerant and racist comments,” the governor wrote.

NJ101.5 filled the airtime with Trentonian writer Jeff Edelstein and NJ101.5 evening host Steve Trevelise, with hosts Jeff Deminski and Bill Doyle keeping their regular after show. All of them filled their hours with calls from listeners about Dennis and Judi’s comments about the attorney general.

On the Jersey Shore Online forum, readers gave their opinions.

“This is America, we have free speech, there’s no such thing as hate speech, that’s a Socialist/Communist ideology, it’s scary how far left this country is leaning, so they called him Turban Man, big deal! They could have called him a Towel Head now that would have been racist!” reader George Worthington commented.

“They should have been taken off the air years ago,” reader Dave Frick wrote.

On his Twitter feed Thursday morning, the attorney general said this: “Thank you to @GovMurphy, @NJSenatePres, @CoryBooker, @RaviBhalla & so many others for your support last night. You’ve got my back – and the backs of all New Jerseyans. Others have faced far worse. We rise above this. Now let’s get back to business.”

NJ101.5 is owned by Townsquare Media, based in Greenwich, Connecticut. 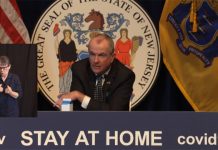