WHITING – Cars parked in a seemingly semi-permanent state along Wranglebrook and Schoolhouse roads may have to find a new place to go.

Manchester Township Police and the township administration have received numerous complaints about the vehicles for months.

“That prompted the police to go out there and do a traffic study and come up with an idea of how to resolve this issue,” Manchester Council President Joan Brush said. “They went out there and found there were some commercial vehicles, which don’t belong parked there anyway. I believe there were some citations issued. But what they plan on doing is [to implement] no overnight parking there. Residents can park there during the day, if they choose to – walk their dog, drive out there and walk in the woods or do whatever they do – that’ll be fine.”

From Route 70, Pleasant Valley Road turns into Wranglebrook Road at Manchester Boulevard. Wranglebrook and Schoolhouse roads split past Spring Street. Both roads have 40 m.p.h. speed limits, which make them dangerous for people getting out of their vehicles along the roads, Komsa said.

He added there’s a reduced line of sight for motorists traveling both directions on those roads. The parked cars create an “unpleasant appearance” for those in the Crestwood Village communities. And, the roads are “essentially being used an overnight parking lot.”

“Our Traffic Safety Unit investigated the complaints and determined that all of the vehicles in question belong to the residents of the Crestwood Village Community and are seldom moved, if ever,” Komsa said. “The police department and the township are in the process of working out a solution which would allow daytime parking only (on Schoolhouse Rd and Wranglebrook Road) but prohibit overnight parking by township ordinance. This has not been finalized as of yet.”

Komsa said he anticipates “that within the next 60 days this matter will be resolved.”

Most of the vehicles are parked across one of the entrances to Crestwood Village IV at Hudson Parkway. Co-op president Bill Burns told The Manchester Times that commercial vehicles are not permitted to park in the community. He said the police approached the co-op board and asked if there was any way to accommodate those vehicles, but Burns said the rules are the rules.

Residents with vehicles that can’t be parked in their driveways or parking spots can use the clubhouse parking lot for $25 a month.

The parked vehicles on Wranglebrook and Schoolhouse roads are parked on the grassy shoulder and not the road, and are parked legally.

“Those vehicles are not our problem,” Burns said. 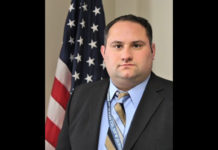