LAKEHURST – The Borough Council tabled an ordinance that would amend its highway commercial zoning district to include assisted living residences and behavioral medical detox centers. The ordinance was scheduled for first reading at the borough’s regular Aug. 16 meeting.

Councilwoman Patricia Hodges, who sits on the council’s ordinance review committee, was the one who asked that it be tabled in order for questions to first be answered.

“Most ordinances that we do are pretty self-explanatory,” Hodges said in a phone call with Jersey Shore Online Tuesday morning. “This one actually changes the zoning in the borough.”

“To change the zoning is something that we don’t ordinarily do,” she said. “I was taken aback that there was absolutely no discussion about it before this ordinance was introduced, and the committee process wasn’t used to develop the ordinance. So, those were my concerns.”

Hodges, along with Council President Steve Oglesby and Mayor Harry Robbins, will meet Wednesday night as the ordinance committee to discuss ordinance 8-13, as well as other ordinances for consideration. Committee meetings are not open to the public, and Hodges said any findings won’t be presented before the next council meeting at 7:30 p.m. Sept. 6 at the Community Center, 207 Center St.

“I want to know what incident or what question generated the need to revise the [zoning]. I wasn’t really given a satisfactory answer, so I asked to have it tabled,” Hodges said. “Who is suggesting we need this ordinance, and what is the impetus for changing the zoning?”

None of this means the ordinance will be back on the agenda for Sept. 6 or any time soon, although interested residents should keep a watch for it on the borough’s website, which posts meeting agendas. The ordinance, if introduced again, would have to be reintroduced for first reading. Although the public can comment on any issue during the open public comment time toward the end of council meetings, public comments are not allowed on the first reading of an ordinance.

The ordinance would “establish appropriate zoning for residential medical detoxification centers to permit such uses consistent with the New Jersey’s Legislature’s recognition that substance abuse treatment facilities are appropriate in some zoning districts but not others…” If the ordinance moves forward at some point, it would allow for assisted living residences, continuing care communities, residential medical detoxification centers, and behavioral health care facilities on lots at least two acres in size. The zoning would be amended “west of Center Street and front of Route 70.”

The facility could only house up to 50 in-patient persons.

Jersey Shore Online reached out to Martin Lynch, the borough’s tax assessor, to ask how many existing two-acre lots were in the one-square-mile borough.

Social media chatter jumped on La Bove Grande, a restaurant and banquet hall started by brothers Jerry and Luigi Bove. The restaurant sits at the western circle at Union Avenue and Route 70.

“If someone is interested in it and that is going through the motions, but as of right now, we’re still in business for a long time,” Jerry Bove told Jersey Shore Online Tuesday morning. He declined to comment further.

No one from the borough’s land use board was available Tuesday. A call to the Pinelands Commission was not returned.

Lifelong Lakehurst resident Joseph Steuber Jr. started a petition at Change.org to stop a detoxification facility from being built in the borough. Burglaries and taxes will increase while home values will plummet, he said.

“First off I’m not opposed to a rehabilitation center. I’m opposed to it being put in Lakehurst. It will most likely be a for profit clinic which means they will fill the beds with people from all over based on ability to pay, leaving residents of our town and surrounding towns who don’t have the ability to pay without access to help,” Steuben said. “The other issue is the outpatient section. This will turn Lakehurst into a hub for addicts. Being such a small town and the fact that it is a walking school district, it poses a safety concern.”

Hodges said she did not bring up La Bove Grande at the council meeting, and anything about building any detox facility is speculation at this point. 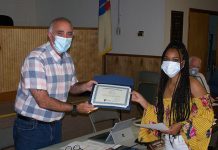 Student Honored For Essay On Lakehurst

Worker Accused Of Sexual Assault Of Senior Gets License Suspended