JACKSON – The township recently added more men and women in blue to their police department during the Township Council’s last meeting of 2020.

Jackson Police Chief Matthew Kunz presented his officers before the dais and residents providing their badge numbers and some background on each of them. Township Clerk Janice Kisty then swore in each officer as members of their family joined them while they took their oath.

Daniel Scharff (Badge #316) is a 2010 graduate of Jackson Liberty High School and served in the United States Marine Corps from 2010-2015. He received a master’s degree in criminal justice from Monmouth University in 2019 and previously worked as a Class II Special Police Officer for the Mantoloking Police Department and North Wildwood Police Department and then as a full-time police officer with the Department of Human Services since June 2018.

Brown attended Mercer County College for criminal justice and served as a full-time police officer with the Oaklyn Police Department.

Michael Collins (Badge #318) is a 2013 graduate of Jackson Memorial High School and served in the United States Marine Corps from 2013-2019 and also attended Ocean County College.

Austin Hershenhorn (Badge #320) is a 2013 graduate of Freehold Regional High School and graduated from York College of Pennsylvania with a Bachelor of Science degree in criminal justice. He has served as a Class II Special Police Officer with the Asbury Park Police Department since March 2017 and also currently serves in the Air National Guard.

Lauren Hornfeck (Badge #322) is a 2009 graduate of Keystone High School in Bloomsburg Pa. and attended Ocean County College. She is currently pursuing a Bachelor’s Degree in criminal justice through Strayer University.

These hires will replace officers who have recently retired and left the agency and once their training is complete and they are assigned to patrol squads, will bring the agency to 97 full time sworn officers.

Chief Kunz said, “they also help the agency in preparing to meet the needs of the growing township population and demands placed on the agency. We thank the Mayor, Town Council members and Township Administration in their continued support to the agency.”

Vice Council President Andrew Kern said, “I would like to congratulate our new police officers. More importantly I would like to thank their families for allowing them to leave the safety of their home to spend their days and nights protecting our residents.”

“I would also like to congratulate and welcome our new police officers. It is nice to see a growing force,” Councilman Martin Flemming said.

“I’d like to congratulate the newly appointed police officers this evening. I certainly wish them well in their career and I hope it is a long healthy career serving the people of Jackson,” Councilman Steve Chisholm added.

Council President Alex Sauickie said, “a big thank you to our newly sworn in police officers and their families. May they serve well and remain safe throughout their career.” 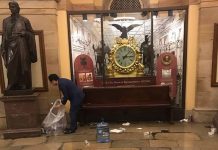