JACKSON – Residents expressed strong concerns about the increase of rental properties in the township as compared to a few years ago. Strong words were also used to describe a lack of code enforcement in the community during a recent council meeting.

Rae Ann Walker noted during the public comment period that the number of rentals had jumped considerably in the last two years and asked if there was a township regulation regarding the duration of time such a property could be rented.

“We have 800 rental properties currently and in 2014 we had 161,” Walker said, expressing concern that the situation was getting out of hand.

“I understand that rentals are necessary but it is causing several areas in the township to be turned into investment properties,” Walker added.

“as to how long they can stay. There are separate state and federal laws that address that.”

Council vice president Ann M. Updegrave, who chaired the meeting in the absence of Council President Kenneth J. Bressi, said “people have a constitutional right to rent. We are looking at the situation.”

Walker continued: “My other concern is of a situation that happened in New York where special interest groups came in and were later indicted for voter fraud. We have 98 rentals on Whitesville Road alone. Green Valley has 51 rentals.”

Walker mentioned a practice of private pools being rented to residents and that she had called the Ocean County Health Department about the matter.

Cipriani said that a cease and desist letter had been sent out to the party involved.

“It is a commercial use not permitted in a residential area,” Cipriani said.

“Everything going on here is a quality of life issue,” Jeff Riker of Walter Drive said. The 25-year resident of the township said he was planning to move out when his last mortgage payments were paid because of a lack of code enforcement which has allowed areas of the community to look unsightly and fall into decline.

Riker said properties on both sides of his home have become unsightly and blames the township’s code enforcement office for not stepping up to correct the situation.

“Enforcement in this town sucks. No one is taking ownership of this problem and it is getting out of control. I heard two building inspectors walked out. Faraday Avenue has a problem with prostitutes. In 25 years we’ve never had a problem with something like that. I don’t blame the police but these are areas that have become run down.”

“Someone dumped a bunch of asphalt and dirt the other night on Edison Avenue. If you don’t think there is an enforcement problem in this township then you need a cup of coffee,” Riker told the governing body.

“No means no. You have to tell those responsible to stop what they are doing. Things have been shifting very fast in this township with a lack of enforcement,” Riker said to the applause of several audience members.

To a question regarding whether the township’s master plan had been recently updated to address such concerns, Cipriani said that while there had been no recent changes to it, the governing body planned to examine it in the near future.

Councilman Robert Nixon said that members of the zoning board were appointed by the council and made recommendations about changes in codes.

Eleanor Hannum said her husband’s business office in the township moved out of the community because of deplorable conditions surrounding the area including debris and unsightly conditions at a vacant Burger King.

Hannum described the area of County Line Road as having become “very blighted. Not the road itself but the area is not being taken care of. You can’t get people to do what you feel they should do so you often feel you should do it yourself. I called the state and the Ocean County Health Department. For my husband to move his business out of this town was not an easy decision and was costly.”

The resident noted a situation of a Lakewood school that borders Jackson which has debris on the grounds. “That school is a mess.” Hannum said, adding that she had contacted Lakewood’s mayor about the situation which she said impacts property value by those across from it in Jackson.

“Why can’t you look at County Line Road and see the problem in that area?” Hannum asked the council.

Councilman Barry Calogero responded to a question about whether zoning board business had been delayed due to a lack of zoning board members attending meetings, saying “while these are all volunteer boards this is a very critical board and once a member is appointed the must take it seriously.” 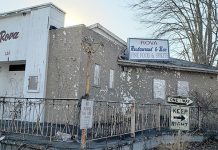