Even a pandemic can’t keep spring from arriving and with it comes fresh fruit and vegetables and plenty of plants and flowers from I & G Farms in Jackson.

I & G Farms has been an institution in Jackson for close to 50 years. It is, located at 150 Whitesville Road it is known for programming some of the tastiest corn in the state. It’s “Jersey Fresh” at its freshest, tastiest and finest!

The plant and produce business founded by Irene and Gregory Johnston has an enduring legacy that has continued on with owner Irene Johnston and her son Jason.

The farm’s hours are Monday through Sunday from 9 a.m. to 5 p.m. The only time they close down the business is in November for two weeks as part of their holiday season transition. They also shut down in January until the third week in March when they re-open for the spring selling season.

Jackson residents, as well as those in communities nearby enjoy their fresh produce, in addition to residents of area towns and even neighboring states, for over 40 years.

When you visit I & G Farms you’ll quickly spot a lot of eye catching seasonal themed painted windows as well as an attractive, welcoming landscape of thriving flowers and plants that are available for purchase.

Irene and her son hope you will be impressed by the large array of fruits and vegetables that will provide a feast for the eyes and an explosion of colors bursting with just picked freshness.

She noted that these days, “people have a lot higher awareness of the food that they’re eating. A lot of them ask me about GMO (genetically modified organism.) GMO for 20 years but if I mentioned it 20 years ago, they would have no clue what I’m talking about.”

Health problems and environmental damage can occur from GMOs. According to the Non GMO Project, GMOs are “living organisms whose genetic material has been artificially manipulated in a laboratory through genetic engineering or GE. This creates unstable combinations of plant, animal, bacterial and viral genes that do not occur in nature or through traditional crossbreeding methods.”

“People know they can come here, where the food was grown. I can give them the source of the seed and I know exactly how it was grown. That matters a lot. People tell me our string beans taste like a bean. They’ve been eating food that has no taste because big corporate farms don’t plow their ground,” Irene added.

“They just keep planting on it over and over again. There’s nothing left in the soil, no nutrients. They have a machine that pulls the plant out of the ground and shakes it to death so beans fall off, go into a hopper, into a bin, get broken and get brown. They’re beat up. Ours are hand-picked and beautiful, she added.

Irene’s motto when it comes to I & G Farms is “if they plant it, they will come.” Gregory’s sweet corn named after her late husband; Gregory remains the star of the market. It is grown in various “blocks,” and staggering the planting time results in corn (hopefully) until the end of October.”

“We always have fresh corn, all super sweet,” Irene exclaimed.

“In my dreams, if someone told me people would go crazy over corn, I would never have believed it. She laughed as she said her husband got up at 5:30 a.m. and was out in the cornfield.” The corn still receives that same level of care.

It may sound odd to imagine corn has a following, but I & G’s corn is legendary and is proof that people will travel to get a great ear of corn.

Jackson resident Liz Ferullo is a frequent customer of I & G. She shared tales of how her relatives bring back the produce bought at the farm to Yonkers, New York.

“My brother and sister-in-law from Toms River say “come over for a barbeque and bring the corn. Make sure that you stop by I & G,” Ferullo said. “This is the sweetest corn anywhere in New Jersey.”

Irene said she also enjoys the lasting customer friendships that have endured through the years including the new ones that she continuously cultivates.

“A lot of customers are connoisseur growers. That’s why they come here. They get information, the knowledge and education they can’t get anywhere else,” Irene added.

Beyond the corn and produce there are many new and different items that are available to pick from to entice Ferullo and others back to I&G Farms over and over again.

Ferullo said she comes to I & G often “for my gardening, my plants, my perennials, my potted plants and the quality is phenomenal.”

Another motto can be found right on the I & G T-shirts which state, “growers for all seasons.” The shirts are on sale inside the building where special plant products are available. The outside pay station area is where gift cards can be purchased.

Poinsettias can be found in the greenhouses every July while autumn ushers in 30,000 field grown mums along with pumpkin’s, cornstalks and straw. When produce season concludes at the end of October, the market shuts down for two weeks and is transformed into a decorating center where wreaths, grave blankets and bows are custom made. Christmas trees are also available for selection.

While time marches on, even during a global pandemic, customers remain thrilled that I & G Farms remains a familiar area landmark. Visit I & G Farms at iandgfarmsjackson.com, and like them on Facebook; IGFarms, but it is always better to simply stop by! If you have questions call 732-364-0308. 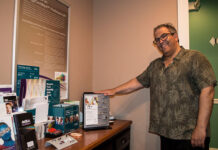