BERKELEY – If you’ve been seeing gold bows on homes and businesses, or the large gold ribbons in front of the municipal building, then they have done their job in spreading awareness of childhood cancer.

After accidents, cancer is the second leading cause of death in children ages one to 14, according to the American Cancer Society. Approximately 1,190 children younger than 15 years old are expected to die from cancer in 2019.

Despite the heartbreaking reality, childhood cancer gets only a fraction of funding for research, said Janet O’Brien. She started Emiliana’s Hope, named after her daughter Emiliana Rose, who passed away in 2015 at just 13 years old. She had been fighting osteosarcoma, a rare bone cancer.

“By placing gold bows on your home or business, you are letting the children and families of Berkeley Township know they are not forgotten. That you support them and their battle,” she said at a recent Township Council meeting where they proclaimed September Childhood Cancer Awareness Month. Free gold bows are available at the recreation building on Route 9 (630 Atlantic City Blvd.) or by contacting Emiliana’s Hope.

“In the last five years, five township children were diagnosed with cancer that I am aware of,” she said. “Two of them with osteosarcoma. Two are currently fighting. Please keep in your thoughts and prayers these children who have battled or currently battling: Christian, Brandon, Trevor, Kane, Jason, Emiliana.”

The group donated $10,000 to Emiliana’s doctor at the Children’s Hospital of Philadelphia to aid in her research, she said. This year, they have promised $5,000 to childhood osteosarcoma research at Dana-Farber Cancer Institute in Boston.

Their next fundraising event is on Nov. 23, featuring Linda Shields, the Jersey Shore Medium at the Bayville Firehouse. More details are underway but the $35 tickets go toward the group’s fundraising.

Visit EmilianasHope.com for more information. Their online fundraising is at gofundme.com/emiliana-shope 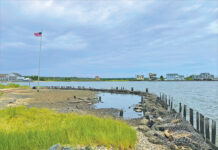