TOMS RIVER – A lot of people said they wanted open space, and the election on Nov. 6 will determine if they want to put their money where their mouth is.

There will be a local question on the ballot asking people if they want to increase the township’s open space tax by 1.5 cents. Currently, the township already collects an open space tax of 1.5 cents per $100 of assessed valuation. This would double it.

On a home valued at around $300,000, which is roughly the township average, a resident’s payment would go from approximately $45 a year to $90.

Township business administrator Don Guardian said that the town collects about $900,000 a year now, and this measure, if passed, would double it. 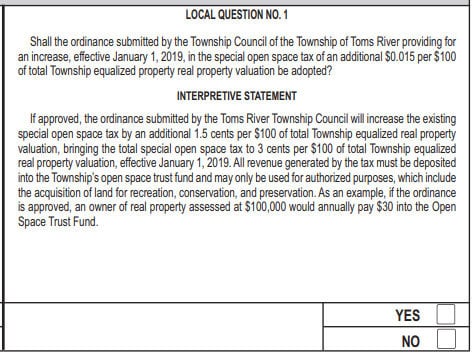 After years of residents asking the township to buy open space, the Township Council put the question to voters last year. However, it was a nonbinding referendum. It was only used to gauge whether people would be interested in buying approximately 250 acres of open space. There was no purchase or money attached to this question. Voters sent a resounding “yes” with 17,949 votes to 3,852.

The difference is that the question on this year’s ballot will actually raise more money for purchases.

The open space tax was approved originally in a referendum held in November of 2000, with the first tax being collected in 2001.