LAKEWOOD – “New” is the word for this season at FirstEnergy Park, the home of the Lakewood BlueClaws.

There will be new entertainment. And the Philadelphia Phillies’ low Class-A farm team will play baseball under some new rules.

The BlueClaws will play their home regular-season opener Thursday, April 12, against the Delmarva (Md.) Shorebirds, a Baltimore Orioles affiliate, at 6:35 p.m. in South Atlantic League action.

Lakewood’s first seven regular-season games will be played on the road.

The BlueClaws have unveiled an ambitious multi-year redevelopment plan for a series of family and fan enhancements, the first since the ballpark opened in 2001.

The 2018 phase includes a miniature golf course and boardwalk attractions, with games and food options, around the outfield concourse.

“We’re excited to usher in this new era of BlueClaws baseball,” said Art Matin, the managing partner of Shore Town Baseball, the team’s ownership group, which purchased the club from the American Baseball Company, its previous owners, last season. “These improvements to the ballpark are just the start of what Shore Town Baseball has in store for BlueClaws fans moving forward.”

Matin said the enhancements are the first in a multi-year capital investment plan designed to create an “even more fun, family friendly and Shore-themed destination.”

The nine-hole family course will be open during games and available for private events. The course was designed by leading miniature golf course design firm Harris Miniature Golf and will offer a feel of the Jersey Shore.

The course will also recognize the BlueClaws’ history with Holes of Fame, celebrating the past accomplishments of a Lakewood player on each hole while also recognizing the long term partnership between the BlueClaws and the Phillies. The teams signed a player development contract in 2016 and it runs through 2020.

Each hole will include special recognition for the achievements of a former Lakewood player. The list of Hole of Fame players will be unveiled on BlueClaws.com and through the team’s social media channels leading into Opening Night. A total of 80 former Lakewood players, led by former Philadelphia stars Cole Hamels and Ryan Howard, have made it to the major leagues – from the Shore to the Show – entering this season.

Ex-Lakewood managers Greg Legg, Jeff Manto and Dave Huppert have coached in the major leagues. Former Lakewood manager Dusty Wathan is in his first season as the Phillies’ third base coach.

“When we came on board, we gathered the office staff for a brainstorming session,” said Lakewood president-general manager Joe Ricciutti, who was hired by the team last season. “We said, ‘How do we begin to freshen up things? What is our identity?’ We bounced around ideas of Jersey Shore elements and how to bring them into the ballpark. We said, ‘What does it mean to be at the Jersey Shore?’ We came up with a vision and put it into architectural terms and drawings.”

Look for more entertainment on the video board.

“We have about 110 or so pieces in our portfolio,” Ricciutti said. “It is another element of fun.”

Packing ’em in: Lakewood last year attracted 338,544 fans to FirstEnergy Park for 65 regular-season openings and second place in the SAL attendance race. It averaged 5,208 fans per game for second in the league.

“Our ticket sales are going really well,” Riccutti said. “We have unveiled a couple of mini ticket plans that have moved well. There are a minimum 20 games that we want to sell out this year. Four of those games have fewer than 1,000 tickets remaining.”

The Greensboro (N.C.) Grasshoppers, a Miami Marlins farm club, led the league last season in home attendance, welcoming 350,743 fans for 67 openings. It averaged 5,235 fans per game to lead the SAL.

“The BlueClaws are a top Jersey Shore entertainment destination and we’re excited to make some great enhancements to the ballpark,” Ricciutti said. “This marks the first phase of a multi-year ballpark development plan that will serve as the face of a bright future of BlueClaws baseball.”

Boom, boom: The miniature golf course, new boardwalk attractions and Suite enhancements are not the lone improvements that will greet fans. The team has added seven Saturday night fireworks shows (June, July and August) to the Friday Fireworks series which runs throughout the entire season. This year, Lakewood will have a team-record 20 shows: every Friday, select Saturdays, plus Tuesday, July 3 and Sunday, Sept. 2.

More comfort: The BlueClaws have upgraded the heating and cooling system on the FirstEnergy Park Luxury Suite level to assure optimum climate comfort for Suite Holders and fans in the Monmouth Medical Center Champions Club no matter the temperatures outside. The upgrades represent an overhaul of the HVAC system.

New way to enjoy a brew: The BlueClaws Biergarten will debut April 12. It will be located down the left field line across from the Third Base Picnic area. It will serve as the new home of BlueClaws Thirsty Thursdays. The event will include dollar Coors and Coors Light drafts plus 50-cent wings (Thursday home games only).

The area will offer expanded seating options with both high-top and sit-down, picnic-style tables available. The Biergarten, which will include the WRAT Trap (named for sponsor 95.9 WRAT) will have additional sales portables for speedier service. A variety of craft beers, including New Jersey brews, will also be available.

Beats and booze: The Biergarten will also include a stage for bands and play host to the Summer Concert Series. At six Saturday home games, the gates will open at 5 p.m. for two hours of live music and drink specials leading into that night’s game. Each Summer Concert Series Night will conclude with a post-game fireworks show.

Ricciutti, who is married and has one daughter, just might jam with a band or two as he has a musical background. He is also a piano player and has played “a little” Billy Joel and Elton John at the keyboard.

Time and money not wasted: The BlueClaws are determined to see that fans get the most bang for their entertainment buck.

“We realize how precious people’s time is,” Ricciutti said. “When families trust us with four hours of their time, it is our obligation to make sure their time is well spent and that any rough spots are smoothed over so that they don’t impact the fans. After people visit our ballpark, we want them feeling it was worth their time. Time is a lot more precious to somebody than $10. We want people to say, ‘I feel great. We laughed. We left with smiles on our faces. We want to come back.’ ”

Speeding up the game: Minor League Baseball has announced rules and procedure changes aimed at reducing the length of extra innings games and the number of mound visits during a game.

Any runner or batter removed from the game for a substitute shall be ineligible to return to the game as is the case in all circumstances under the Official Baseball Rules.

For purposes of calculating earned runs under Rule 9.16, the runner who begins an inning on second base pursuant to this rule shall be deemed a runner who has reached second base because of a fielding error, but no error shall be charged to the opposing team or to any player.

Visits by coaches and position players to the mound will be limited based on the classification level.

The mound visit limits will apply whether the game is scheduled for seven or nine innings. For any extra innings game played each club shall be entitled to one additional non-pitching change mound visit per inning.

A pitcher must be removed from the game on the second visit by a manager/coach in an inning.

Molloy returns: Lakewood’s manager is Marty Molloy, who guided the BlueClaws to a 73-66 overall record last season in his first year at the helm. The BlueClaws were one game shy of earning a playoff berth, falling short by percentage points for the first half title.

This is the first full professional season for many of the league’s players. Each team is scheduled to play 140 regular-season games, including 70 at home.

Milb.com and southatlanticleague.com contributed to this report. 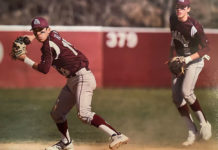