WARETOWN – A massive blaze broke out Sunday night at the Buy Rite Liquors on Route 9 in Ocean Township, sending hundreds of firefighters and emergency personnel to the very dangerous scene.

An alert was sent out from the Ocean Township Police Department via email and the Nixle text alert system at around 11:32 p.m. urging residents to stay away from the area to allow the professionals on scene to do their jobs. 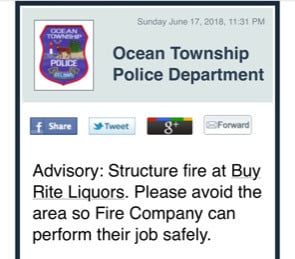 According to chatter on the Ocean County Scanner News Facebook page, several Fire companies including Waretown, Lanoka Harbor, Barnegat, Stafford and even units from Toms River have been called in to battle it.

Some concerned residents in Lacey Township heard sirens and were making inquiries on social media as to what was happening.

According to the Waretown Volunteer Fire Company, the blaze was a difficult one given the size of the building and the interior ceiling. Crews set up ladder trucks to deal with some of the flames and heat.

They also had FAST Teams from Bayville and Toms River on hand to rescue any firefighters in danger, according to the Volunteer Fire Company’s Facebook Page.

The blaze was extinguished over night and no one was injured.

There is no word yet on what spawned the inferno but a full investigation is underway.