BEACHWOOD – In the difficult times following the tragic crash that hospitalized the owner of der Wunder Wiener, the family can see just how much of an impact the man has on the community.

Gerald LaCrosse has been a councilman in Beachwood for years. But people outside of that small borough know him as the smiling face of the iconic hot dog truck on Route 9 in Berkeley.

On the morning of June 11, LaCrosse was inside the truck when an SUV heading south on 9 left the roadway and crashed into it. The 74-year-old was taken to Jersey Shore University Medical Center in Neptune, where he still remains.

His son Jerry LaCrosse and his niece Charissa Fromm started a GoFundMe page to bring in money for the family (gofundme.com/gerald-lacrosse039s-huge-losshelp). The food truck was his livelihood, and they are unsure if it can be rebuilt.

She said his condition has been unpredictable. He’s critical, but showing signs of progress that someone in his situation shouldn’t have.

He’s undergone two surgeries. On Wednesday, they tried to take him off a ventilator, but his lungs filled with fluid. So, they put him back on the ventilator to stabilize his breathing as well as his heart rate and blood pressure.

He’s sedated, but because of the person he is, the sedation is somehow not slowing him down. He’s still trying to talk to his wife and daughter. When that failed, he tried to write to them, but his handwriting was illegible.

“It shows what a determined, strong fighter he is,” she said. “We’re hoping that strength and spirit will help him get through this.”

Sadly, this is not the first situation like this that the LaCrosse family has had to endure. In 1988, they lost their 19-year-old daughter, Desere, in another senseless crash. Seaside Heights police had been in pursuit of a vehicle they were trying to pull over for a broken headlight, when the vehicle collided with hers, according to an interview with Gerald LaCrosse in The New York Times.

“It makes you wonder why so much tragedy has hit their family,” Fromm said. “The first day in the waiting room was like a terrible flashback.”

Fromm said the family is amazed and immensely grateful at the outpouring of support that has come from the community. Not just financial support, but the kindness that people have shown them has really touched their hearts.

If you want to help contribute to the family’s medical bills, there are two ways to do so.

Two local PBAs, Berkeley Local 237 and Beachwood-Pine Beach Local 253, will be setting up a trailer on the Wunder Wiener’s location and selling hot dogs, chips, and drinks. The trailer will be there on July 5, 6, and 7 from 11 a.m. to 3 p.m. Proceeds from those sales will go to the family. They will also be taking donations there.

“While we will never be able to duplicate his skills, we will certainly try our best to get close,” the flyer read. 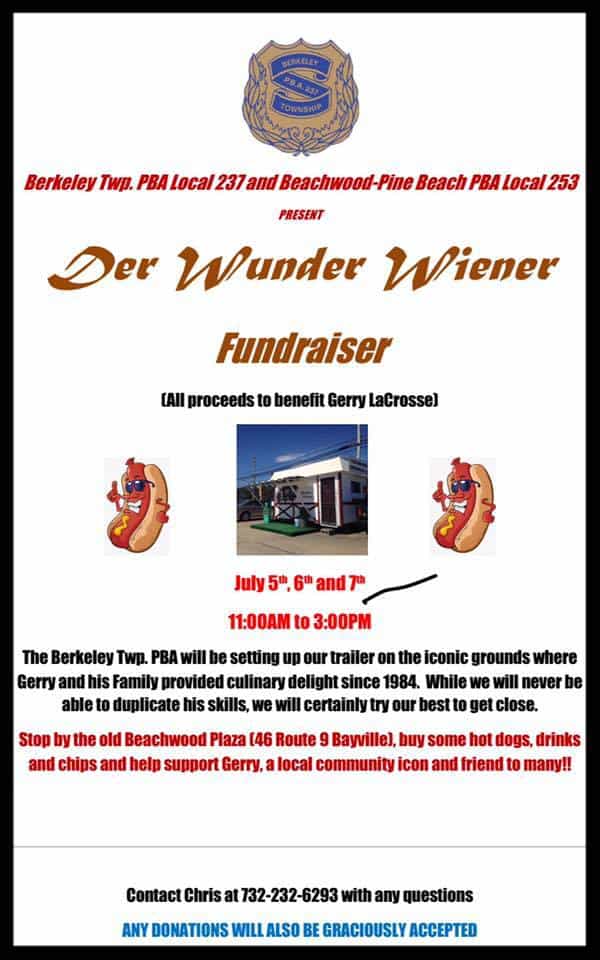 Fromm’s GoFundMe can be found at gofundme.com/gerald-lacrosse039s-huge-losshelp. As of press time, it had raised approximately $8,000 in three days.

After the GoFundMe was started, Fromm said she saw a lot of support coming in from all over. It’s been shared online more than 1,000 times. People she doesn’t know are leaving comments about visiting the eatery and wanting to give back. Everyone seems to have a memory about the food truck and about LaCrosse. It reminds her of the movie “It’s A Wonderful Life.”

“The whole town is coming together and supporting this man who has done so much for his community,” she said. “Gerry is like George Bailey.”

The driver of the SUV, Mark Poplawski, 52, of Forked River, suffered minor head and neck injuries. Meanwhile, the destroyed building was removed from the site.