FORKED RIVER – After calling the Popcorn Park Zoo his home for almost 20 years, a beloved rescue tiger has passed away.

On April 15, Popcorn Park Animal Refuge took to their Facebook to break some devastating news about one of their rescue animals.

“It’s with great sadness that we write this… Caesar has crossed over the Rainbow Bridge to be with those who once also called Popcorn Park their home.”

On June 18, 2002, Caesar was brought to Popcorn Park after being rescued from Harwood, Texas. When he arrived at the park, he was starting to grow back hair, as he was suffering ringworm since being born at a “sanctuary” called Noah’s Land.

“Hair or no hair, just traveling all that way, he was like a kid on a new journey, one that would bring him to Popcorn Park where he would be safe the rest of his life,” Popcorn Park said in a post. “Caesar quick became everyone’s best friend. He loved to rub up along his fence and talk with his caretakers. Chuffing, moaning, and groaning, any sound that he could make in order to talk with us. He was two when he arrived, and he never seemed to get any older. He just acted like a 2-year-old ‘cub’ all his life. He loved to play hide and seek just before he was supposed to come in for his dinner, he would hide behind one of the bigger rocks in his yard, thinking we couldn’t see his ears or his tail flicking behind him.”

Although there were numerous amounts of happy moments, there was also sad times. The shelter explained how when Caesar’s buddy Bengali passed in 2013. It was a sad time for everyone.

“When he lost his best friend Bengali, they were brought up from the same awful place in Harwood, Texas and then reunited here and lived next to each other the rest of their lives. His good buddy Bengali passed in 2013. Shortly thereafter Kya came and took up the yard next to his, they made fast friends and would paw at the shift door between their dens when they were done with dinner. They kept good company.”

In February of 2020, the shelter knew something was wrong when Caesar began only eating half of his dinners and he had started drinking a lot of water. After they performed tests, they discovered Caesar was in renal failure.

After two and a half weeks of supportive fluid therapy and care, Caesar was back to his normal self.

“He enjoyed his pond all summer after that and the great fall weather we had. We even had some snow that he played in, he loved the snow.”

In March the staff gave Caesar his dinner one evening, and the next morning they found him still asleep. When they couldn’t wake him up, they knew he had passed in his sleep.

“Thank you, Caesar, for allowing us to be a part of your life, for greeting us every morning, for talking with us all day and for wishing us a good night each night. You were and will always be the ‘cub’ at the heart of our family,” Popcorn Park said. 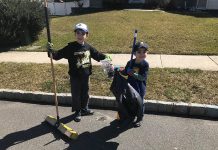