BARNEGAT – The current state of the Elizabeth V. Edwards School was discussed at a recent Barnegat Board of Education meeting.

The fate of the Edwards School has been of some concern to many members of both the Barnegat BOE and the Barnegat Committee, and has become a strong topic of conversation among residents.

Board President Scott Sarno said at a board of education meeting that the BOE had previously discussed with the Barnegat Township Committee about converting the empty Edwards School into a new location for a Town Hall building. This was in talks for quite some time, according to Sarno, however the opposition of the residing mayor at the time, Mayor Susan McCabe, to the project put a full stop to the advancement of the idea.

“At the end of the day, one person held it up,” said Sarno.

The Edwards building is presently under the ownership of the Barnegat School District. According to Sarno, the desire of the school district was to sell this building so the township could renovate it and convert it into a functional Town Hall building. He said that he believed this transformation would then cost taxpayers significantly less money.

After the meeting, Barnegat Mayor Albert Bille said that this was not the case.

Bille said buying the Edwards building would also need to incorporate the costs of renovations, the addition of the police, paving the parking lot and adding a bus depot, which he calculated to cost an estimated $10 million. This price tag on the Edwards building nearly matches that of the upgrades needed for the current township building when accounting for necessary renovations.

It would be a “moot point,” to move the Town Hall when the expenses are almost the same, he said. The mayor also noted that it would be impossible to sell the land that the current Town Hall is on because it is under state mandate and would take years to sell, pending permission from the state.

Despite the plan that Sarno deemed very “fiscally responsible,” the mayor at the time voted against the conversion of the Edwards School. Although Mayor Bille was not mayor at the time of these talks, he said that he was not and is not in favor of the move. This conclusion now designates that the building remain in its current state, unused.

At the meeting, former Deputy Mayor of Barnegat and current Township Administrator, Martin Lisella, also attempted to clarify the reasoning for the township committee’s opposition to the project.

“Since most of the (population) movement was west of Route 9…they (the committee members) thought that the population move meant that it was not the center of town to move the Town Hall,” said Lisella.

During the time that the purchase and remodel of the Edwards School was in talks, Lisella was more involved as the Deputy Mayor. Now as the Business Administrator for Barnegat, Lisella said he does not speak on behalf of the committee, but only wanted to clarify some of the inconsistencies floating around.

According to Lisella, the change in the committee’s view of the location and the existing property that the Town Hall sits on were the main reasons that the Township decided to stop negotiations for the ownership of the school.

“We couldn’t sell that property if we stood on our heads, you have to go through government agencies…if we did move somewhere else other than where we sat, it would cause extra expense,” said Lisella.

The Edwards School still remains vacant and unused in its location on Route 9 in Barnegat. Despite the efforts of the board and the township to restore function and purpose to the empty building, the Edwards School will remain as is, until a new proposal for the use of the building and land crops up. 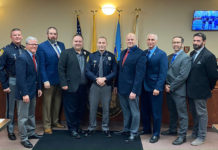