TOMS RIVER – Ocean County taxpayers will see a slight decrease in their county taxes in 2018.

For at least the second year in a row, taxes will decrease: even a half-cent decrease is going in the right direction, Ocean County Freeholder John Bartlett said. While no services saw an expansion, no services were cut.

With Winter Storm Quinn raging outside, the Freeholders introduced their $416.1 million budget March 7. A public hearing will be held 4 p.m. April 4 at the county administration building.

“This board is following through on our commitment to lower the county property tax rate as we recover from the losses of the great recession and Superstorm Sandy,” Bartlett said. “Last year we decreased the tax rate by 1/10th of a cent and this year we will decrease it by half a cent to 34.7 cents per $100 of equalized value.

“This is the direction we would like to follow,” he said in presenting the proposed budget to the Board on Feb. 28. “As our ratables rise we will gradually reduce the tax rate.”
The budget comes in $6 million under the 2 percent cap (The state requires that budgets do not increase more than this). The overall budget is up $8.1 million. The amount raised by taxation is up 1.29 percent, to $346.5 million.

County property values increased almost three percent, to $99.8 billion.
“And while we are seeing those values gradually increase, we are still $9 billion below the 2009 values when the economy took a downturn,” Bartlett said. “Coupling that with Superstorm Sandy three years later, we saw a major loss in the County. That is now beginning to turn around.”

Bartlett said the county’s surplus in 2018 is $55.4 million. The proposed budget includes about $22 million from surplus.

“In order to maintain our AAA bond rating, it’s imperative we keep a surplus balance that is equal to about 10 percent of the budget,” Bartlett said. “Having the highest bond rating possible helps us tremendously when we need to bond for capital projects.

“In addition a strong surplus balance is necessary in times of natural disasters and emergencies as we all saw after Superstorm Sandy,” Bartlett said.

“We have to build one year’s budget with an eye toward what it means for the future,” Bartlett said.

This year’s budget will use more cash – $25 million – for capital expenditures so the county doesn’t have to bond for items such as trucks or heavy equipment. 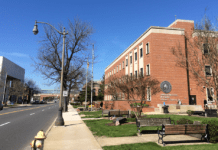