OCEAN COUNTY – Robert Cartwright dedicated a great deal of his life to military service. From 1951 to 1954 he served in the U.S. Marine Corp spending a year in Korea.

Six years after his 1954 discharge, he joined the reserve of the U.S. Marine Corp and was stationed at Naval Airfield Willow Grove, Pa. in charge of the crash crew. He retired in 1999 settling in Lakewood with his wife Rae.

But it was an act of heroism four decades ago that was recognized recently by military and Ocean County officials who joined to honor Cartwright with the Navy and Marine Corp Medal given for heroism not involving actual conflict with an armed enemy of the United States. While Cartwright received a certificate of commendation for his actions in 1978, the medal that was to come with it came to him in the mail in 2015.

“This has been a long time in coming,” said Ocean County Freeholder Director Joseph H. Vicari. “We want to thank you for your actions that day and for your service in active duty and in the reserve.”

The way he tells the story, the event happened when Cartwright was serving in the reserves in 1977.

“I was a full-time reservist Gunnery Sergeant with the United States Marine Corp. and I was washing my clothes on Aug. 6 1977 at Marine Corp Base, Twentynine Palms, California, when I saw the diesel fuel truck completely engulfed in flames.

“I stood up, grabbed a 50 pound fire extinguisher and headed toward the truck on the airstrip,” said Cartwright. “I crawled under the truck, put out the fire and went back to washing my clothes.

“I hadn’t given it a second thought,” Cartwright said.

But the men he was stationed with saw the heroism in Cartwright’s actions and requested he be recognized.

In 1978, Cartwright received a Certificate of Commendation from the United States Marine Corp. for outstanding achievement recognizing his actions a year earlier.

The certificate reads: “upon learning that a diesel refueler truck had caught fire on the airstrip, Gunnery Sergeant Cartwright picked up a chemical fire extinguisher, and without regard for his own safety and fully aware of the personal dangers involved, unhesitatingly ran to the burning truck, crawled underneath it, and put out the fire.

“His courageous and prompt actions in the face of great personal risk averted a massive explosion and fire that could have cost numerous lives and caused considerable damage,” the certificate reads. “Gunnery Sergeant Cartwright’s presence of mind, striking courage, and coolness reflected great credit upon himself and the United States Marine Corp.”

As Cartwright continued up the ranks of the Marine Corps Reserve, he later learned his actions also resulted in him being the recipient of the Navy and Marine Corps Medal. That medal came in the mail in January of 2015.

“You have made a significant difference in the lives of our veterans,” Vicari said.

“He never gave up his service whether in the reserve or as a civilian,” said David Perez, former Commander of VFW Post 6063. “Up until a few months ago he served as a facilitator for veterans suffering from Post-Traumatic Stress Disorder.”

Cartwright, who serves as chaplain for the Lakewood Police Department is the father of four and the grandfather of 10. He and his wife Rae recently celebrated their 64th wedding anniversary. He has worked in the field of emergency response as both a police officer and a firefighter.

“More than 60,000 veterans call Ocean County home,” Vicari said. “My colleagues and I on the Board of Freeholders are proud of the men and women from Ocean County who have served and continued to serve in our armed forces.

“Like Mr. Cartwright, they are all heroes,” he said. 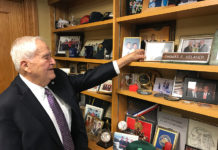