LAKEHURST – For Lakehurst Elementary School students, the events of the Hindenburg tragedy are always in the back of their minds – and their backyards.

On one sunny day, Melissa Dolan’s class of fifth- and sixth-grade students planted a tree for two reasons: To remember those who died in the tragedy, and to celebrate Arbor Day. The students stood around the school’s courtyard with eighth-graders Madison Degnan and Elizabeth Oliver. The girls, members of the school’s Project Academically Talented, had just shared some facts about the Hindenburg with the students. For example, the Hindenburg wasn’t designed to fit in its hangar, yet it somehow did. Another fun fact: The mail being carried on the Hindenburg the day it burned survived the fire and was able to be delivered.

Dolan’s class then lined up to recite facts about Arbor Day. Following that, they planted a tree donated by the Ocean County Shade Tree Commission.

The tree will be dedicated to those who lost their lives as part of the Hindenburg tragedy. Thirty-six people died: 13 passengers, 22 crew and a local Lakehurst man, Allen Hagaman, whose family still resides in the borough.

Madison and Elizabeth told The Manchester Times that some field trips throughout their school career have revolved around Joint Base Maguire-Dix-Lakehurst, and inevitably ended up at Hangar 1 and its field, the location of the Hindenburg tragedy. In third grade, they visited the site and got to see a model of the dirigible.

The tragedy is touched upon in school, said assistant principal Stephanie Rucci. However, the Nazi ties to the Hindenburg are glossed over. The Third Reich used the Hindenburg as a symbol of its might.

Rucci explained that the school has a close relationship with JBMDL. Not only is this because of the school’s close proximity to the base, but that many students have parents and other relatives working there.

“It’s nice that we have the military families here. The students really identify with what goes on over at the base,” Rucci said.

For Madison and Elizabeth, though the tragedy is only known through research and old photographs and film footage, they still are amazed such a thing happened in Lakehurst.

“What was supposed to be ordinary turned to tragedy for so many families,” Madison said. “And it happened right in our backyard.” 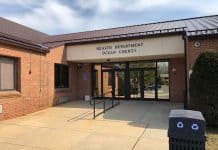 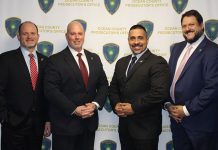