LAKEHURST – The historic Hindenburg disaster marks its 80th anniversary this May 6, the day the Nazi Zeppelin burst into flames over the borough in a deadly incident that made international news and remains one of the most well-known incidents in local history.

At over 800 feet long – nearly three football fields – the Hindenburg routinely made the flight from Germany to Lakehurst in a mere two days while carrying scores of passengers.

According to The Manchester Times archives, locals would recall watching the Hindenburg on its many successful voyages overhead in Ocean County. During 1936 and 1937, the massive aircraft made no less than 10 trips to the borough. That’s more than 1,000 passengers, and mail and freight, including full-sized automobiles, making the journey in the luxurious airship.

It’s gruesome end is memorialized in the local museums of the Lakehurst Historical Society and the Navy Lakehurst Museum. But we found a transcript of the broadcast, detailing the explosion as the devastation unfolded.

Published in the January 16, 2001 edition of the Manchester Times, “Hindenburg, The Broadcast”:

It is one of the best known news broadcasts in history. The words “oh, the humanity” are a reference point for the century.

Herbert Morrison and his sound engineer, Charlie Nehlson, were in Lakehurst from a Chicago radio station to witness the majestic Hindenburg arrive from another cross-Atlantic flight. Morrison ended up making one of the most recognizable dialogues of the last 100 years.

The following is a transcription of Morrison’s words as he watched the Hindenburg cruise into Lakehurst and burst into flame:

Well, here it comes, ladies and gentlemen. We’re out now, outside of the hangar, and what a great sight it is, a thrilling one, just a marvelous sight. It’s coming down out of the sky, pointed directly towards us and toward the mooring mast. The mighty diesel motors just roared, the propellers biting into the air and throwing it back into a gale-like whirlpool. No wonder this great floating palace can travel through the air at such a speed, with these powerful motors behind it.
Now and then the propellers are caught in the rays of sun, their highly polished surfaces reflect. The sun is striking the windows of the observation deck on the eastward side and sparkling like glittering jewels on the background of black velvet.
Now the field, as we thought active when we first arrived, has turned into a moving mass of cooperative action. The landing crews, their posts and orders are being passed along, and last-minute preparations are being completed for the moment we have waited for so long.

The ship is riding majestically toward us like some great feather, riding as though it was mighty good, mighty proud of the place it’s playing in the world’s aviation. The ship is no doubt bustling with activity as we can see; orders are shouted to the crew, the passengers probably lining the windows looking down at the field ahead of them, getting their glimpse of the mooring mast. And these giant flagships standing here, the American Airline flagships, waiting to direct them to all points in the United States when they get the ship moored.
There are a number of important persons on board, and no doubt the new commander, Captain Max Pruss, is thrilled, too, for this is his great moment, the first time he’s commanded the Hindenburg. On previous flights, he acted as Chief Officer under Captain Lehmann.
It’s practically standing still now. They’ve dropped ropes out of the nose of the ship, and it’s been taken a hold of down on the field by a number of men. It’s starting to rain again; the rain had slacked up a little bit. The back motors of the ship are just holding it, just enough to keep it from —
It burst into flames! Get out of the way! Get out of the way! Get this, Charlie! Get this, Charlie! It’s fire and it’s crashing! It’s crashing terrible! Oh, my! Get out of the way, please! It’s burning, bursting into flames and is falling on the mooring mast, and all the folks agree that this is terrible. This is the worst of the worst catastrophes in the world! Oh, it’s crashing … oh, four or five hundred feet into the sky, and it’s a terrific crash, ladies and gentlemen. There’s smoke, and there’s flames, now, and the frame is crashing to the ground, not quite to the mooring mast … Oh, the humanity, and all the passengers screaming around here!
I told you … I can’t even talk to people … around there. It’s — I can’t talk, ladies and gentlemen. Honest, it’s just laying there, a mass of smoking wreckage, and everybody can hardly breathe and talk…I, I’m sorry. Honest, I can hardly breathe. I’m going to step inside where I cannot see it. Charlie, that’s terrible. I — Listen folks, I’m going to have to stop for a minute, because I’ve lost my voice. This is the worst thing I’ve ever witnessed. 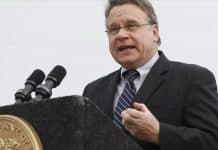 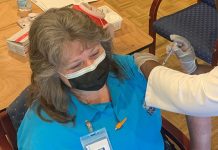 Harrogate Completes First Round Of Vaccinations 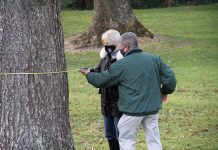