STAFFORD – A trip to Annapolis, Maryland might be what saves the 2018 New Jersey fishing season.

Saltwater anglers and their allies crowded the Stafford Township municipal chambers, where the Marine Fisheries Council held its regular Sept. 7 meeting. Although the first hour was filled with its usual reports and comments, the Council’s second hour saw passionate arguments and discussion from Council and audience members about what to do with the ever-shortening fishing season and its negative impact on commercial fishermen throughout the state and beyond.

Jim Hutchinson Jr.’s Sept. 8 article at TheFisherman.com quoted boat captain Adam Nowalsky that cuts felt in fish seasons and quotas for 2017 will be mild compared to what’s expected for 2018, based on the early returns from the National Oceanic and Atmospheric Administration Fisheries surveys. Those quotas and seasons are set annually.

Captain Victor Hartley III of Miss Ocean City explained to Jersey Shore Online that although regulations dictate what size fish may be kept, anglers must count all fish caught toward quotas.

The quotas and seasons were cut because the powers-that-be determined that New Jersey overfished in previous years. Three fish are most caught in the state: flounder, sea bass and scup.

Ed Yates, president of United Boatman of NJ, told Council he and his members need black sea bass season opened on an emergency basis, as this year’s season was cut short. Although some fisherman have permits to fish in federal waters, those fish cannot be landed in New Jersey.

“This has led to two things: unemployment for not only my crew, people at our dock, and now I’m getting people telling me that they’re going to lose their help,” Yates said. “So now we’re really in a dilemma. We’re sending people to the unemployment office early because of this.”

He added that the fishermen of New Jersey are “fed up” with the “nonsense” of the Mid Atlantic Fishery Management Council and Atlantic States Marine Fisheries Commission, the bodies that determine recreational harvest limits.

The MAFMC was created as one of eight regional fishery management councils under the Magnuson-Stevens Fishery Conservation and Management Act of 1976. That is the primary federal law regulating marine fishing in federal waters. The law was overhauled in 1996 and again in 2007, and is up for reauthorization.

Some saltwater anglers support the Modernizing Recreational Fisheries Management Act of 2017, introduced back in April. The sponsors say Magnuson has created unnecessary restrictions and seeks to have the fisheries management overhauled and modernized.

NOAA Fisheries, part of the Federal Commerce Department, monitors the fishing of waters, and according to its mission statement, under the authority of Magnuson, works with the regional fishery councils “to assess and predict the status of fish stocks, set catch limits, ensure compliance with fisheries regulations, and reduce bycatch.”

Locally, the NJDEP’s Division of Fish and Wildlife holds to ASMFC seasons and limits, which are approved by the Marine Fisheries Council each March.

Council chairman Dick Herb said New Jersey was the first state ever to challenge the ASMFC and win a reversal, specifically about fluke. A coordinated effort by all fishermen—commercial, recreational, private—can pressure those decision-making bodies to adopt more favorable regulations for New Jersey.

“At least we broke that mold,” Herb said about the decision reversal. “We’ve got to build on it. We can’t just say, ‘Hey, we won. Now we’re going home.’”

In the meantime, audience members called for an organized, formal protest of the Dec. 11-14 joint meeting of the MAFMC and ASMFC in Annapolis. It’s at that meeting when recreational harvest limits for 2018 will be proposed and adopted.

Hartley has offered to arrange a charter bus so fishermen will make the trip to Maryland. A show in numbers may help sway things in New Jersey’s favor. 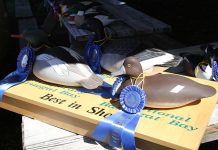