MONMOUTH COUNTY – A Monmouth County resident has started an initiative to help local those in need called SACK, or Supporting A Community with Kindness. Stacy Wiener, of Loch Arbour near Asbury Park, began SACK a year and a half ago when she started knitting and crocheting soap sacks with cotton yarn and donating them to homeless shelters and food pantries.

“As a Monmouth County resident, I have personally donated over 3,000 soap sacks to shelters and pantries in both Monmouth and Ocean Counties, places such as Peoples Pantry, United Way, Salvation Army, Interfaith Network,” said Wiener. “The response has been overwhelmingly positive.”

Wiener noted that there is a large need for toiletries throughout the underserved population. She remarked that when she donated the soap sacks, many told her that they never received toiletries before.

“Not only were the clients thrilled to receive soap, but the sack made it more personal. The sacks can be used as a washcloth as well to store the soap,” she explained.

Wiener donates a majority of her creations to places in Monmouth and Ocean counties but has also worked alongside other, larger organizations to put on soap drives. Organizations such as Girls Scouts, Boy Scouts, AT&T, Ace Gymnastics, and more, have helped her run soap drives, which have also help cut her costs, she said.

At the start of her project, the cost the yarn and bars of soap reached about $200, she said. “During the first year, I spent several hundred dollars to buy additional soap and yarn.  However, my cost has dramatically been reduced since people are organizing soap drives and crocheters/knitters are sending me soap sacks,” she added.

In each hand-knit sack, there is a bar of soap and a personalized tag. Some knitting and crocheting groups have also pitched in to help Wiener make the sacks. She noted that she donates at least 50 soap sacks every week.

After The Asbury Park Press published an article about Wiener’s soap creations in January, she has received even more attention from other areas in the US, receiving soaps sacks from people as far as California.

“Some want to knit/crochet the sacks and send them to me so that I can donate them in my area while others plan to donate their soap sacks, with a bar of soap, to food pantries and homeless shelters in their own communities,” she said.

Wiener’s initiative has grown exponentially since she first began, and since its origin, almost 5,000 soap sacks have been distributed all over.

“I started a movement and couldn’t be happier!” said Wiener.

She hopes that her work will inspire others to contribute or even join in on her project. “It is my hope that the momentum of this soap sack movement continues indefinitely,” she said. “I would be thrilled if crocheters/knitters all over the United States would donate soap sacks…in their own communities.” 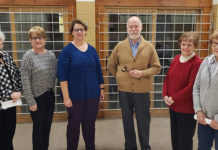 Historical Society Plans For The Future

Man Who Left Dog To Die Gets One Year In Prison