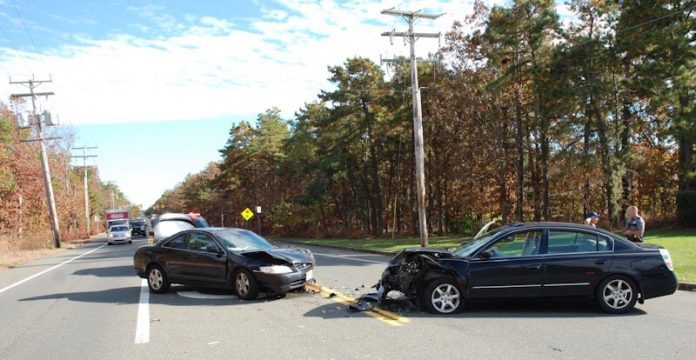 MANCHESTER – This week has been fairly busy for serious car accidents in the Manchester area. The third of which took place on Wednesday afternoon, according to the police department.

59-year-old Raymond A. Cappiccille Jr. of Scotch Plains was driving his black 2000 Honda Accord west on Route 530 and while attempting to make a left on Pine Ridge Boulevard, he struck a 2005 Nissan Altima head-on. The driver of the Nissan was identified as 59-year-old Kathleen A. Aurelio of Carteret.

Cappiccille Jr. was not harmed in the crash but his 86-year-old passenger, Jean Cappiccille of Whiting, was taken to Community Medical Center in Toms River with non-life threatening injuries.

Aurelio’s injuries were more serious but not life threatening. She was taken via MONOC medivac to Jersey Shore University Medical Center in Neptune.

In addition to the Manchester Police Department, the Whiting Volunteer First Aid Squad, Quality Medical Transport and MONOC Paramedics all responded to the scene.

A full probe is underway being conducted by Patrolman Ian Bole and Ptl. Jesse Hoydis of the Manchester Police Department’s Traffic Safety section.

Witnesses are asked to call police with any information you may have.