OCEAN COUNTY – A public hearing on whether to allow a 30-mile natural gas pipeline through Manchester and Plumsted townships will be held in Toms River on July 26 at the Pine Belt Arena.

This venue is located on the premises of Toms River High School North, 1245 Old Freehold Road. The doors will open at 9 a.m. and the hearing is expected to begin at around 9:30 a.m.

New Jersey Natural Gas is proposing this pipeline in order to guarantee quality of service for 1 million people, while environmentalists are challenging it because they are concerned that spills could damage the Pinelands and the water supply for the area.

The Southern Reliability Link, as NJNG is calling it, would begin in Chesterfield, linking to the Texas Eastern Transmission line. This is a 9,096-mile line from Texas and the gulf coast to the tri-state area.

The path of the pipeline would travel through North Hanover, Upper Freehold, and Plumsted. Then, it would go through Joint Base McGuire-Dix-Lakehurst and Manchester Township. The line would run through existing rights-of-way. The roads listed are:

Easement within Joint Base McGuire-Dix-Lakehurst

The purpose of the public hearing is just to record comments from residents. No action would be taking place. It is being held by the Pinelands Commission, an independent state agency that oversees such projects.

The commission has already stated that the pipeline is consistent with the Pinelands Comprehensive Management Plan, a document that governs economic and recreational activity within the Pinelands.

This will be the only opportunity for oral comments to be entered into the record. The written comment period would close at 5 p.m. on Aug. 2. Written comments can be sent to the New Jersey Pinelands Commission at P.O. Box 359, New Lisbon, NJ 08064. The Commission can be contacted via email at njngcomment@njpines.state.nj.us, but emails will not be entered into the official record.

Anyone wishing to view files in relation to the gas company’s application can do so by appointment, by calling (609) 894-7300.

A Need For The Pipeline

The pipeline was approved by the state Board of Public Utilities and Department of Environmental Protection, said Mike Kinney, a spokesman for New Jersey Natural Gas. “Eighty-five percent of the natural gas in Monmouth, Ocean, and Burlington counties come from one feed on the northern end of the system,” he said. This is where the system hooks up to Transco, a pipeline heading out of Texas to various sites throughout the country. The new pipeline would not replace the existing one, nor would it be a back-up for it. The two would complement each other.

Any disruption of the NJNG system to the north, or Transco, would seriously threaten gas usage for 1 million people in 83 municipalities, he said. Additionally, when there are major disasters, like there was in Superstorm Sandy, the customers on the southern end of the map have less of a chance of having gas.

“That experience made us look at our system,” he said.

This is why “Reliability” is in the pipeline’s name. One of the goals is to make sure that, even in an emergency, there is a back-up that can still supply the area with natural gas when it’s needed, he said.

Environmentalists are concerned over building a pipeline through the Pinelands, saying that the Pinelands are supposed to be protected from this kind of encroachment.

Raven Potosky, of Manchester, said the pipeline going through town was “very concerning.” She was worried that the pipe, going through the Pinelands, would endanger the aquifer below it, either when it was being installed or through any future spillage.

“It’s a direct threat to our water supply,” she said.

“We don’t see any need for it where we are,” she said.

Ocean County has three representatives on the Pinelands Commission, but only one that was placed there by county officials. This is Alan Avery, the chairman of the Ocean County Natural Lands Trust Advisory Committee, which suggests land to be purchased for open space.

The other two representatives are appointed by the governor: Lacey Committeeman Gary Quinn, a builder, and Bay Head Councilwoman D’Arcy Rohan Green, who is on the board of directors of Save Barnegat Bay.

Freeholder Director Joseph Vicari said that the freeholders do not get involved in Pinelands Commission issues. Any attempt by them to try to influence the members could be seen as illegal tampering.

Instead, he said that the two residents’ comments will be forwarded to the members so they can read them.

However, Vicari said that personally, he is in favor of this pipeline because of a few reasons. One of which is that leaders at the Joint Base Dix-McGuire-Lakehurst have said the pipeline is vital to them. Another is that in times of emergencies, natural gas is usually one of the utilities that is still functioning. 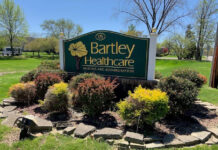