MANCHESTER – Township police are investigating a two-vehicle accident that claimed the life of a Jackson man and injured two others. One of the victims had to be airlifted to a shore area trauma center.

Manchester Township Police confirmed they were called to the area of Commonwealth Boulevard and Northampton Boulevard on June 24 just before 8 p.m. in the Pine Lake Park section of town.

A Honda Civic and a Jeep Grand Cherokee had extensive damage and were off the roadway when officers arrived. The investigation revealed that the Honda started to accelerate westbound after stopping at the stop sign on Northampton Boulevard and entered the Jeep’s lane of travel, which was traveling north on Commonwealth Boulevard, causing the collision.

The driver of the Honda, 70-year-old George Hruszczak of Jackson, sustained extensive internal injuries and was pronounced dead on the scene. His passenger, 41-year-old Suzana Collazo of Jackson, was extricated by the Manchester Volunteer Fire Department before being airlifted to Jersey Shore University Medical Center by a Robert Wood Johnson Life Flight medevac helicopter. Collazo is currently listed in critical condition as she sustained severe internal and head injuries.

Police said both Hruszczak and Collazo were wearing their seat belts, and the airbags were not deployed.

28-year-old Lois Genna of Manchester was the driver of the Jeep and she was taken to Community Medical Center in Toms River for treatment for non-life-threatening injuries. Police said she was not wearing her seat belt at the time of the crash

The roadway was closed for several hours and traffic had to be diverted during the rescue efforts and investigation. 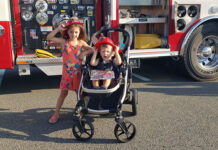 Manchester And Lakehurst Cops Team Up For Night Out