LAKEHURST – The Mayor and council set goals for downtown improvements for the new year.

Mayor Harry Robbins thanked the governing body for the work they performed in 2020 and he also thanked residents for allowing him to be the borough mayor.

Business development and improvements to the downtown area on Union Avenue will be the focus of 2021. Mayor Robbins performed a ribbon cutting ceremony at the Griffin Realty building located at 28 Union Avenue.

Robbins said that ribbon cuttings for new businesses was a favorite activity for him as mayor. He noted after the ceremony that featured the Realty firm’s owner Ryan Griffin and his staff that, “it is the borough’s 100th birthday but unfortunately with public safety we feel that these aren’t the times to hold such a big gathering in the borough even though July is a way’s away from us.”

“The problem is to schedule and plan such an event takes months to do and unfortunately I believe we’ll be putting off our 100th anniversary to 101 hopefully. Maybe we’ll throw in some dalmatians in there,” the mayor joked referencing the Disney animated classic “The 101 Dalmatians.”

“As far as businesses are concerned, we love to see the downtown prosper as it has been doing. Even during the pandemic, I still see people visiting our eateries here. I see them at the ice cream stores and I’ve been glad to see some of these stores getting patronage because it is tough. It is hard and many mom and pop businesses have gone under because of this pandemic,” the mayor added.

Mayor Robbins said some of the goals for the year include some renovations projects including new restroom facilities in the borough’s lake park. “We’ll be digging up this road (Union Avenue) to put a new put a new water main in.”

The mayor said he was in the middle of negotiating a water interconnection with Manchester and the Joint Base and their contractors. “Overhead goes up everywhere. There isn’t much you can do about that but our tree project in town is underway.”

Mayor Robbins said, “we had to remove all the trees in town they were rotting away but we are replacing trees thanks to Dr. (Brian S.) Klohn (of Lakehurst Dental on 19 Union Avenue) who actually offered to pay for the trees. He doesn’t live in town but he’s always here for us. We will be replacing the trees downtown.”

“That is precisely why we chose a town such as this to have an office that small town feel that close knit community feel. That is exactly what we wanted,” Griffin added.

Griffin said, “the fact that the military is such a stronghold in town that is huge as well so as far as selecting a location we could have gone anywhere but we chose this location due to its military, retirement, neighborhood and close-knit feel.”

“We appreciate it as well,” Mayor Robbins said welcoming Griffin and his staff to the community.

Robbins also spoke about the one eyesore in the downtown area, that being 6 Union Avenue where a condemned building exists. He said this structure has been a concern of his and members of council given its stability.

“A firm phone call has gone out (to the owners of that building) and our attorney Ian Goldman has been in touch with their attorney and it is coming to a head. They will have to do something about it or I’ll knock it down,” the mayor said. “It is a dangerous building. It really is. The side of it is ready to come down.”

Those wishing to assist with the borough’s centennial celebration, (whenever it will be possible to be held) can contact Borough Hall by calling 732-657-4141 to be added to the volunteer committee.

During the reorganization meeting, Councilman Robert McCarthy and Councilwoman Patricia Hodges were sworn in for three-year terms. They had been re-elected during November’s uncontested council race. 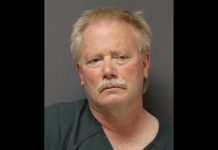