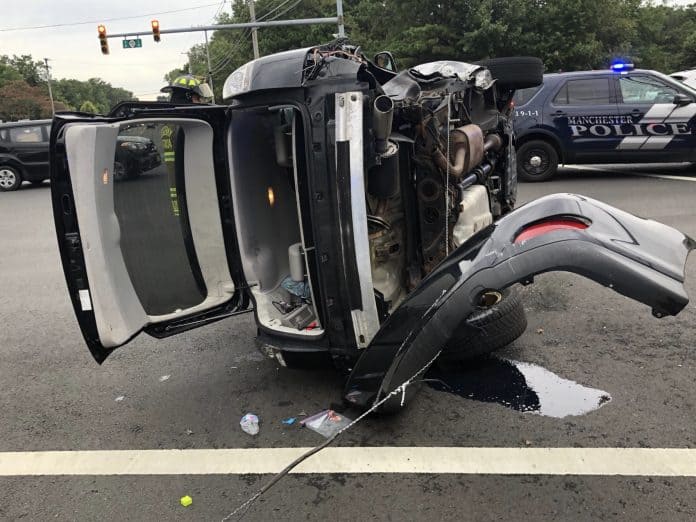 MANCHESTER – Four people were injured in a two vehicle collision on the afternoon of Aug. 23 at the intersection of Route 70 and Route 571.

Township police reported at approximately 5:12 p.m. officers responded to that intersection of to investigate the two-vehicle accident. Initial reports indicated that the two vehicles were still in the roadway and that one of them was overturned.

Upon arrival, the officers observed a black, Lexus RX330 on its driver’s side in the middle of the intersection. The vehicle had significant passenger side damage. The officers discovered in the roadway a black, Honda Accord which had front end damage.

An investigation revealed that the Honda was traveling east on Route 70 through the intersection of Route 571 when it collided with the Lexus which was making a left turn at the intersection, from Route 70 west onto Route 571 south.

Oscar Balcarcel, 20, Lakewood was identified as the driver of the Honda, identified as 20-year-old. Balcarcel was traveling alone at the time of the crash and not wearing his seatbelt. The front airbag inside the vehicle deployed, but Balcarcel still sustained a laceration to his head.

As a result, Balcarcel was transported to Jersey Shore University Medical Center in Neptune for treatment. The driver of the Lexus, 45-year-old Sean Spitz, of Wayne was traveling with his wife and son at the time of the crash.

Spitz and his occupants wore seatbelts and his vehicle’s side airbags deployed during the crash. Despite overturning, the occupants from the Lexus sustained only minor injuries and were transported to Community Medical Center in Toms River for treatment and evaluation.

The cause of the crash is still under investigation and is being investigated by Township Traffic Safety Unit Patrolman Michale O’Hara.

Assisting at the scene were EMTs from Quality Medical Transport, paramedics from MONOC, and volunteer firefighters from both the Ridgeway and Manchester Fire Departments.