JACKSON – A man from Red Bank filed a lawsuit against Six Flags Great Adventure for injuries he claims he sustained during his experience on a ride that led to spinal surgery.

The suit alleges that the roller coaster Kingda Ka exposes riders to whiplash injuries. Dr. Christopher Fabricant of Red Bank claims that he sustained severe and permanent neck and spine damage during his ride in 2017 on what Six Flags coined the “fastest roller coaster in North America.”

The federal lawsuit alleges that park employees were negligent in not warning Fabricant of the risks he faced on the coaster as a 6’ 2” man. It claimed that he was not a candidate for safe riding as the roller coaster can pose a risk of whiplash if the person’s head extends above the rear of the seat.

The suit also alleges the seat’s safety harness can cause “crushing injuries” for taller riders.

Fabricant rode Kingda Ka with his son on April 23, 2017. The lawsuit, filed last month, seeks damages for Fabricant and his wife.

When Fabricant entered the ride, the suit stated that the park employee failed to properly adjust the harness, causing it to become locked very tight, causing “excruciating” pain in his shoulders.

Although the ride lasts mere seconds from start to finish, the suit claims Fabricant was in excruciating pain the entire time.

According to the Six Flags website, Kingda Ka is a U-shaped roller coaster that travels up to 128 mph in just 3.5 seconds reaching up to 45 stories high. It states that the ride “is not recommended for wimps.”

Following his ride on the coaster, Fabricant discovered that he had sustained an acute rupture of at least two intervertebral discs, leading to weeks of doctors’ visits and ultimately surgery, according to the suit.

Fabricant recently underwent back surgery and expects to have another surgery and consistent medical treatment for the foreseeable future.

In addition to the medical repercussions of his ride, the suit points to the misleading signage at the park as another factor in Six Flags’ negligence. It noted that the ride displayed a maximum height requirement as 77 inches, which is taller than Fabricant’s height.

“In retrospect it is clear that he was misled by these printed guidelines,” the suit stated.

The suit also calls into question the presentation of the park’s signage, which is legally required, to notify riders that injuries must be reported to the park within 90 days in order to take legal action. The suit alleges these signs were “inconspicuous” due to “small font size.”

A spokesperson for Great Adventure did not comment on the matter. 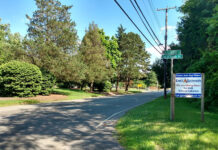