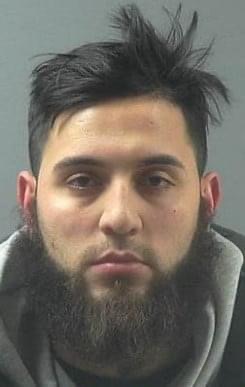 JACKSON – A man wanted in connection to a crash that killed an 81-year-old woman was taken into custody, police said.

Roberto Alcazar-Sanchez, 27, of Jackson, surrendered to United States Customs and Border Patrol Protection Agents in Laredo, Texas, police said. He must quarantine due to COVID-19 restrictions prior to being brought to Ocean County.

Alcazar-Sanchez is the suspect in a crash that took place at around 6 p.m. on December 24, 2020. A Mercedes Benz was getting off I-195 at Exit 21. As it was attempting to turn onto Cedar Swap Road, it collided with a 2003 Chevrolet Silverado.

The driver was Norman Shtab, 83, and the passenger was his wife, Phyllis Shtab, 81. The two Howell residents were brought to Jersey Shore Medical Center in Neptune. Phyllis Shtab succumbed to her injuries on December 26.

Alcazar-Sanchez also had a passenger: Jose Misael Pementel-Mendoza, 30, of Wrightstown. He was transported to Jersey Shore Medical Center following the crash, treated for his injuries and released.

Alcazar-Sanchez fled on foot. Investigation determined that he had gone to Mexico.

Alcazar-Sanchez’s girlfriend, Reyna Mendez, 27, of Jackson, who was not in the vehicle, was later questioned by law enforcement. She was charged with Hindering Apprehension or Prosecution for allegedly giving false information.

“I am extremely grateful for the cooperative efforts of our law enforcement partners at the local, county, state, and federal levels in connection with this very thorough and intensive investigation. Knowing full well that he was being relentlessly pursued by multiple law enforcement agencies for more than two months, Alcazar-Sanchez really had no alternative but to surrender himself to the authorities. Soon, he will be returned to Ocean County where he will face justice,” Prosecutor Bradley Billhimer said.