JACKSON – Wanted: people who will limp, slither and eat brains in dark scary places at a noted New Jersey theme park. Well, the eating of brains is probably stretching it a bit, though.

Six Flags Great Adventure recently held a round of auditions for the undead in preparation for its annual Fright Fest program which takes place each autumn and provides scary hayrides, performances and attractions at the theme park.

It was a dark and scary night, tailor made for zombie auditions. Amid the gray sky, rain and thunder outside, five people ranging in age, background and residency auditioned inside the park’s employment training center. They provided their best scream and creepy walk for the chance to be hired as a zombie.

Entertainment supervisor Alex Volper asked each candidate to step up and give their best scream, a demonstration of how they might fall down and die, how they would walk around patrons of the park and to showcase a unique skill they had.

“No one under 16 can audition for this though we do hire people younger for other park positions,” Volper said.

Robbie Zumsteg, entertainment manager at the park, said about 250 performers would be needed to fill various slots for this year’s Fright Fest program.

“We have 50 from last year. The usual day for a zombie performer is 3 p.m. to midnight after they are made up which takes about a half hour depending on their character. We have 11 make-up artists on hand to do that. It can be a pretty long day for our performers.”

Zumsteg headed a panel of staff who interviewed the candidates of the undead during the process. While staff members were reluctant to provide specifics on the pay range for zombies, they did say that it starts at minimum wage and is based on experience. Separate from those auditioned as zombies, Zumsteg said a dozen dancers were being hired for the Deadman’s Dance Show this year.

Emily Ingenito, 18, of Staten Island, New York, literally bent over backwards to get the job during her audition. She and her fellow candidates were asked to demonstrate her special ability as a Fright Fest performer. She showed she could bend her back nearly to the floor, a skill that could prove handy as a zombie.

The distance factor didn’t bother her, either.

“It only took me about an hour to get here from where I live, given traffic. I think this will be fun. I’ve always wanted to do this,” Ingenito said.

Angela Daurie, 29, of Kenilworth, works as an administrative assistant at a school but said, “A part time job for the season would be a lot of fun. I love to do costuming and play with makeup and special effects so I thought this would be a great way to meld those hobbies.”

“I’m actually more of a Star Trek, Star Wars kind of gal so branching out into horror should be a fun opportunity,” Daurie added.

John Cooper, 38, of Fairless Hills, Pennsylvania came out to the park with his wife Christine who had suggested they both audition.

“I love horror. I love it to death. I’ve always wanted to do Fright Fest. My wife wanted to do this. My favorite movie of all time is Stephen King’s “It” featuring a killer clown and I can’t wait to go see the new version of it…I may have to watch it with eyes closed,” Cooper said.

Six Flags Great Adventure Public Relations Supervisor Kaitlyn Pitts said Fright Fest started in 1992 and has been very popular over the years with different themes and new programs offered each autumn. Pitts said all five applicants who auditioned that night were hired.

“We have clowns, we have zombies, we have some new secrets coming up for 2017,” Pitts said. The park’s new website sixflags.com/greatadventure/special-events/fright-fest-night went live on August 21 and features details of this season’s new attractions. 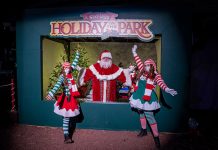 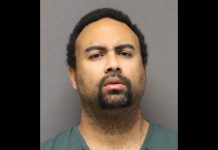