BRICK – Revenues from Brick beaches this summer was at an all-time high this year, surpassing even the years preceding Superstorm Sandy.

“Last year was the best year ever, before this year, in total sales,” said Director of Recreation Dan Santaniello just after Labor Day.

Twenty-nine people drowned at the Jersey Shore this summer, the most ever, Santaniello said, but Brick had a very safe season.

“Our lifeguards did an amazing job. The water was very rough this summer, and they always kept our patrons out of the dangerous areas,” he said.

Every morning during their drills, Brick lifeguard would assess the shifting sandbars because the worst rip currents are between the sandbars.

“The sandbars can change in a day. They can shift 50 to 60 feet pretty quickly,” said Santaniello, who was a township lifeguard for 20 years.

One of the biggest challenges this summer was during the last two weeks of August when many of the lifeguards had to return to high school or college for spring sports.

“It puts us with a low number of lifeguards – we only had 16 when we would normally have 35 – so we had to pay overtime, but lifeguards who are younger than 18 aren’t allowed to work overtime, so it was tricky,” he said.

Another challenge was the August absence of long-time beach captain Donovan Brown, who fell and broke his kneecap after slipping on a nylon beach flag while exiting his truck at the end of July. He will need a six to eight month recovery, Santaniello said.

One of Brown’s duties was to switch off with Santaniello for daily 4 a.m. beach raking, but Santaniello trained Hudson and Brennan, who took over the job.

“This year we handed out reviews for the public to fill out at the end of the summer, and we got over 1,000 back, and they were all very good. The public feels like they have a say, and we take their suggestions into consideration,” he said.

For example, one suggestion was for an additional foot spigot on the Brick Beach 3 shower platform, he said.

The steel wall was fully exposed during March and April, but the Department of Public Works covered most of it in time for Memorial Day.

“They just had to do some minor maintenance throughout the summer, but the wall was covered except for a small stretch near Camp Osborn where it was a little exposed,” Santaniello said.

The lifeguards performed 8 water rescues; 6 water assists; 68 instances for medical aid; one instance of administering oxygen; there were 2 calls for EMTs; 3 calls for Brick Police; 3 lost persons (children, who were found); and 1 disorderly persons report.

Santaniello said the Recreation Department would be hiring about 20 lifeguards for next season. If you are interested, call 732-262-1073 after January 1, 2018. 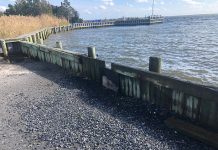