By Bob Vosseller and Chris Lundy

JACKSON – A young fox that had bitten at least one person in Jackson has tested positive for rabies, the mother of a victim reported.

On June 13, 4-year-old Lilith Cimino was bitten by a fox that came running onto the family’s property. Although foxes are usually timid and more interested in food scraps than people, this one made it a point to target the young child. It bit the back of her leg as she was running for the house. Her big brother pulled the fox off her and rescued her.

He punched it and slammed it to the ground. It died after animal control took it away. It was later tested for rabies and it was positive, said Talia Nielsen, Lilith’s mother.

The family lives off Aldridge Road. She said five of her seven children simply wanted to enjoy a sunny, Sunday afternoon outside when the attack happened.

“We had just gotten home from a park. The kids were hot and sweaty and they asked to play in the hose and I said ‘of course’ and I said it was out in the front yard. Earlier that day a friend of mine told me to let the kids know that there was a fox that had attacked a mutual friend of ours’ father,” Nielsen said.

Nielsen told her children that a fox looks like a little dog and cat mixed together and “‘if you see a fox get away from it.’ We’re not even in a wooded area. We are off of Aldridge in Jackson – in a residential neighborhood. My kids were outside playing in the hose and I start hearing my oldest daughter start screaming bloody murder. I am thinking someone was trying to take one of the little kids. She came in and said, ‘mom it’s the fox it’s the fox.’

“My oldest son wakes up from a nap and hears someone screaming as his bedroom is right next to the front door and he said as soon as he started running outside, he saw the fox charging at my 4-year-old Lilith. She was the last one to make it in to the door.”

By the time the Jackson Memorial High School senior got to his sister the fox had bitten her in the leg. He grabbed it from the back of its head and he punched it with the other hand before letting go. Their mother hadn’t gotten outside by this point. “He punched it with his previously broken hand so he was in a lot of pain,” his mother said.

“He was already slamming the fox on the ground when I got outside and I said, ‘okay Matthew you can stop.’ He said, ‘I got it. I got it.’ There was a basket outside so I grabbed at it and put it over the top and I told Matthew to sit on the basket until the cops get here,” Nielsen said.

Nielsen said a neighbor had been outside and had recommended she call 911. “She called 911 because I couldn’t get my hands to stop shaking enough so I can dial my phone. My 15-year-old came out and takes over at the basket because Matthew’s hand is in a lot of pain at that point.”

“They brought Lilith back outside because she had crawled herself into the house. The EMT was there within 10 minutes and the cops showed up right after, then so did animal control. The whole fox incident and the fox in the basket was like 45 seconds. It was very quick,” Nielsen added.

The fox was subdued at this point and animal control took it from the basket. “It was still pretty small. To me it looked like almost an adolescent red fox. It was turning red in the neck area. The rest of it was gray. It wasn’t too big. It was the size of a small dog. The other kids said it saw them and came directly at them. It came from the neighbor’s front yard into our yard.”

Nielsen added, “I don’t know if it was because they were out there playing but I learned another little girl had also been bit. All three bites were within a mile of each other.”

The incident at the Nielsen home happened between 2:30 and 3 p.m. She spoke to the Ocean County Health Department on Monday and learned that by the time the fox had been driven to animal control it had died. “I assume from my son slamming it to the ground.”

Nielsen was later contacted to tell her that the fox had rabies. Fortunately, her daughter had begun rabies vaccinations as a precaution. 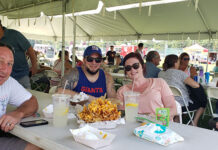