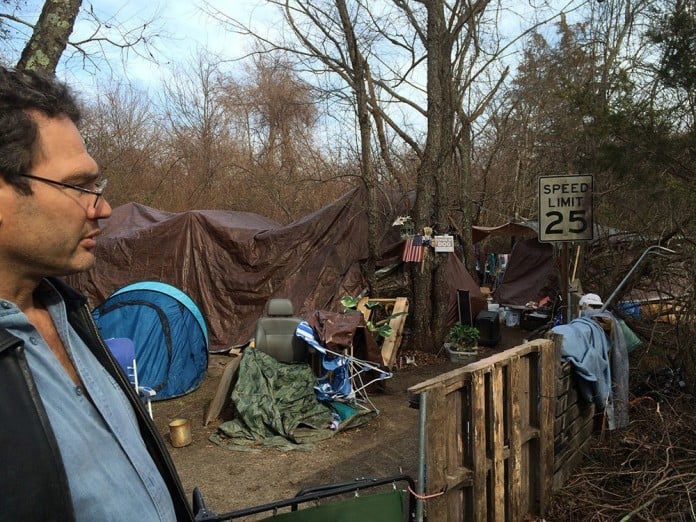 HOWELL – It’s quiet, walking into the homeless camp in Howell. Most of them are at work.

That’s the contradiction that Minister Steve Brigham, who looks after the camp, wants to be known. Not everyone who is homeless has substance abuse or other issues. Poverty comes from not having enough to afford rent or a mortgage in a very expensive world, he said. Even working for $12 an hour, there are no inexpensive homes in the area. Poor people have, in essence, been zoned out.

Joe is a contractor, who does maintenance on a per diem basis. He gets picked up in the morning at the camp. Nancy and Jack ride their bikes into Lakewood and clean schools. Kevin cuts down trees, when his injured back allows it. Carlos stocks shelves. Igor is older and isn’t currently employed.

Cindy, who up until recently worked in the Lakewood industrial park, is looking for work. Her tent defies the stereotype of homeless. From the outside, there are decorations in front of the layers of tarp. To enter, you have to step up onto the plywood base, which keeps it off the cold, wet ground.

The first thing you see inside the tent is a scanner and printer. This is where she does work for the camp and searches for jobs. The inside is shaped like a plus sign. There are a table and chairs in the middle. A kitchen area with a hot plate is to the right. The bed is straight ahead. Storage is to the left. All the decor is color coordinated black and white.

The location of the camp is a bit of a secret, since Brigham does not want to upset the township governing body or residents. It’s off of Route 9 in Howell. There’s a dirt road that curves around some heavy trees to a parking lot. The few homeless who have vehicles have them parked out there. Garbage and recycling is separated and then dropped off on New Hampshire Avenue.

There are a lot more decorations here than there were at Tent City. Painted wooden decorations are hung on trees, and several of the residents have a decoration with their name on it out front of their tents.

All of the tents congregate in a central area near the entrance. A few tents are for storage. There is a small garden, and they’ve had some luck with that. They have tried to drill a well, but can’t manage to get the water pressure for it to be really useful. One area consists of generators and batteries that power people’s electronic devices.

A small trail winds deeper into the woods and leads to a prayer garden. This is a rather striking natural phenomenon, a circle with a lone tree in the middle. Stone monuments, donated from a local source, dot the area. Prayers are written and hung up on the tree. There’s a small, still pond behind the prayer garden that might be a retention basin.

It’s a small community. Someone from the outside brings a meal every Sunday, and everyone eats together, family style. Most of the residents are older than 55. After 9 o’clock, it gets quiet.

Brigham was a contractor for years before his current situation. He found some people who needed camping equipment and propane. This situation eventually grew into Tent City in Lakewood. Eventually, he gave up his old life to live among them.

What Happened To Tent City’s Residents?

At different times, between 60 and 120 residents were known to live in a sprawling homeless camp in Lakewood off Cedar Bridge Avenue.

Tent City had a combative relationship with Lakewood authorities. While many residents came by and gave supplies, the township did not want them squatting on its land. There had been reports of drug and alcohol use, and there were a few small fires. Some people had to be kicked out because they caused too much trouble. Those fires Brigham suspected might have started from people trying to scare the homeless out of the woods.

The township performed a few actions to curtail Tent City and its residents. They blocked the road going in so people would have trouble bringing supplies. They took Brigham’s bus, which had been converted to have a shower and other amenities, and scrapped it. They passed a law making it illegal to sleep outside.

Ocean County does not have a homeless shelter. Ultimately, the county was sued to provide one, but nothing came of that suit.

Tent City closed on July 3, 2014. Lakewood was required to find housing for every resident living there for one year.

“Everyone was homeless again by July 3, 2015,” Brigham said. “There was no job training, no job placement, no supportive services at all.”

In part, the success of Tent City became its undoing. As word of it spread, more homeless came, and it became difficult for Lakewood’s governing body to ignore.

“It’s hard to manage that big of a camp,” he said of Tent City.

“About 60 got housing for a year. That year has been over with,” Brigham said. Many went back to being homeless, although they no longer had their camping supplies. The donor network had also dissipated, not knowing where to find them.

Some drifted off to other states. Without any way of keeping in touch, Brigham does not know where some of them went or what their welfare is like now. There are a few small areas in Howell, Brick and Toms River that are home to a few of them. The seven who live in the Howell camp now are all Tent City transplants.

“There are still a lot hidden away in Lakewood,” he said.

Not Another Tent City

This Howell location was discovered by one of the homeless who knows his way around a computer, Brigham said. He was able to locate it, and then others scouted it out.

Some things have carried over from Tent City, such as the chapel. This is a group of seats under a tent, with a lectern at the front. Heating for the camp has switched back to propane, since wood stoves were found to be too unpredictable.

Lessons that were learned at Tent City also made it here. There are several fire extinguishers mounted on trees throughout the camp.

One thing that is different is the relationship with local authorities.

“Howell has been very friendly. Police will check in on us. ‘How are you doing? Have a nice day,’“ he said.

This camp is being kept intentionally small, Brigham said. Other homeless people have come to the camp and he finds different locations for them.

“Howell’s asked if the camp is going to get bigger,” he said, noting that it will not. “They’ve been really nice to us so I’m going to respect that.”

Donations For More Than Just Homeless

Despite being hidden, individuals and civic groups still know where to go to bring donations, Brigham said. However, being only a handful of people, not all of the donations stay there. If the homeless there can’t make use of something, they find someone who can. In this case, they are either taken to other homeless or re-donated to other local poor, given out in Lakewood’s town square. In these cases, the homeless are actually donating to poor people living in houses.

There are a few people, for example, who make their living shoveling snow. This winter has not been good for them, Brigham said. Someone he knows works at a library who connects him with people who need help. There are a lot of people in need, and it’s become a mission to spread the help as widely as possible.

The day-to-day operations of the camp require keeping up with the cost of propane in the winter and water in the summer, Brigham said. Camping equipment is always ideal, because there is a lot of wear and tear on theirs.

The daily needs are not as important as the political needs. What Brigham wants to do is create housing that the working poor can actually afford.

Years ago, the state courts created a Counsel on Affordable Housing that required every town to set aside some of their property for low-to-moderate income families. However, even these properties are way out of the range of the very poor. So, while the state requires towns to zone for low income, they are not required to zone for very low income. Mobile home parks are being built over, with no new ones being built.

The tiny homes trend is slowly catching on in other states, but not here yet, he said. There is an example of one on the dirt road leading into the camp. It’s the size of a shed. Inside, there is a living area/kitchen, a full bathroom, and a loft where the bed is.

“You don’t realize until you live in a situation like this how much you don’t need,” he said. “It’s 103 square feet but it’s illegal anywhere in New Jersey.”

What Brigham is looking for, which will help people more than temporary assistance, is a restructuring of building and zoning laws to allow tiny homes or any other truly affordable homes in towns close to jobs.

“It’s discrimination under the color of law,” he said.