HOWELL – An employee of Xscape Theatres was arrested and the building evacuated after police found a grenade and guns with hollow point ammunition in his vehicle.

Jacob Cavanaugh, 24, of Manchester was charged with two counts of unlawful possession of a handgun, second degree, and possession of hollow point ammunition, fourth degree.

Another employee told a manager that Cavanaugh had showed him guns in his car earlier in the week. Therefore, the manager told Officer Stephanie Regina, who was on a regular security detail at the theater.

The officer then learned from police communications that Cavanaugh had a warrant for his arrest by Milltown Municipal Court for failure to appear on a drug paraphernalia charge and a township ordinance violation. Additionally, he had a charge out of Hazlet for driving while on a suspended license.

Officers found the suspect’s car, a 2008 Kia Rio, in the parking lot. A search of the vehicle turned up two revolvers. One of them was unloaded. The other had hollow point ammunition.

The hand grenade was also found at this time. Cavanaugh claimed he had another grenade. As an employee, he had access to the theater. This caused the theater to be evacuated of approximately 500 patrons under the direction of Sgt. Michael Popek. Off-duty Howell Detective David Gilliland happened to be in the theater watching a movie. He identified himself and coordinated the evacuation. The parking lot was also shut down at all entrances.

“We were not taking the chance an accomplice was involved and was inside the theater,” the police news release read.
The New Jersey State Police Bomb Squad responded and determined that the explosive part of the grenade had been removed, rendering it harmless. The theater was searched for other devices, and none were found.

Cavanaugh was brought to police headquarters for processing, and his vehicle was impounded pending forfeiture proceedings. The Howell Police’s report stated they are thankful to Xscape management who took the proactive approach notifying the officer.
“At this time we do not believe Cavanaugh had any intentions to harm anyone. He made unsubstantiated claims he was involved in law enforcement. He was cooperative throughout the investigation,” police said.

The police also thanked the patrons who conducted themselves in an orderly manner and followed directions, which helped the situation greatly.

On the Howell police Facebook page, a resident questioned whether it is safe to visit that theater. Chief Andrew Kudrick responded “Without hesitation, I’ll bring my family there and to the many other businesses in town that have a much higher call volume. Let the appropriate actions of the staff and police be your deciding factor rather than the inappropriate conduct of an individual.” 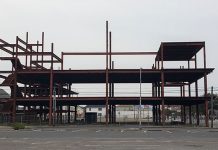 Rusting Eyesore In Seaside Heights May Soon Be Removed