OCEAN COUNTY – It’s a day etched in all of our minds. September 11th, 2001. Thousands of people lost their lives in the worst terror attack on our soil. The mere mention of 9/11 brings back horrifying memories for each and every one of us. The wounds are still raw – for many, they will never heal no matter how much time passes.

The anniversary of that sunny Tuesday morning is here once again – this Monday, we will all remember.

Ocean County officials plan to honor the memories of those lost with their annual wreath ceremony at the county’s September 11th Memorial monument on Hooper Avenue in Downtown Toms River.

At 8:30 a.m., Ocean County Freeholder Director Joe Vicari and Ocean County Prosecutor Joseph Coronato will place wreaths at the memorial and at the nearby monument recognizing the military personnel from the county that made the ultimate sacrifice in the ongoing War on Terror. The monuments are located in the courtyard between 119 and 129 Hooper Avenue.

In a county press release, Freeholder Vicari said “We remember the thousands of victims of the terrorist attacks on American soil in New York City, Washington D.C. and Pennsylvania. We remember our 19 residents from the County and all those who had connections to Ocean County that were lost that day. It was a day in our history that we will never forget.

“We also recognize the work of the emergency responders and we deeply appreciate the efforts of all those who worked tirelessly to help save lives and in the aftermath of the attacks,” Vicari added.

The public is welcome to attend the ceremony. There will be plenty of available parking in the county garage.

Other ceremonies are planned for Ocean and Monmouth Counties including one on the campus of Ocean County College and in Middletown. 37 Middletown residents died on 9/11/01 when the World Trade Center was struck. 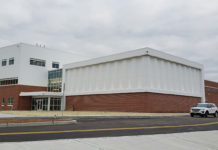