HOWELL – A small mulch fire in Howell Township quickly grew out of control causing a house to catch fire.

Police say the blaze broke out Saturday afternoon outside a Hampton Road home in the Candlewood section of town. The blaze quickly spread severely damaging the home.

Police Chief Andrew Kudrick tells Jersey Shore Online, “one resident sustained burns. The first police officer on scene ran around back to notify the residents who were outside that the front of the house was on fire. A resident inside unknowingly exited through the front resulting in the burns.” 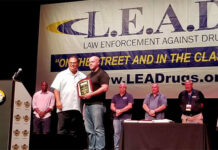