BRICK – Tragedy strikes in Brick Township. The 15-year-old boy who was pulled from a lagoon on Saturday has died in the hospital, according to a source close to Jersey Shore Online.

A text alert sent out from the Brick Township School District confirmed that the unidentified teen, who was a sophomore at Brick Township High School, succumbed on Sunday.

Brick Police Sargent Jim Kelly told Jersey Shore Online Saturday that authorities along with first responders arrived at the home on Toronto Drive at 6 p.m. The boy had been swimming with friends when he went under and never came up.

More details were released Sunday. Kelly explained that the homeowner pulled him out of the water and he had been down at the bottom for several minutes.

The teen was unconscious and unresponsive when he was taken to Jersey Shore University Medical Center in Neptune and his condition was not known.

Around 9:30 on Sunday night, Sargent Kelly released this statement to the local media via email: “Regarding the incident that took place yesterday behind the residence on Toronto Drive, the updated status of the teenager is that he unfortunately succumbed to his injuries and has passed away.”

The text alert from the school district sent out Sunday said that there will be grief counselors at both the Brick Township High School and Lake Riviera Middle School. 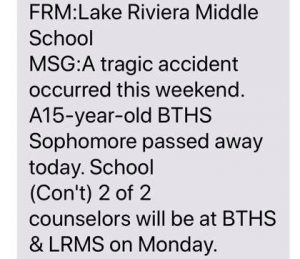 Suspect Named In Ring Of Burglaries