On October 22, the Street Crimes Unit Detectives noticed two people meet briefly in a parking area in the Maple Leaf Complex. The one individual threw a drawstring bag into the back seat of a white Chrysler 300 and afterwards the vehicle left the parking lot speeding.

Officers Mark Catalina and Mike Zolezi Jr. alongside detectives pulled over the Chrysler in the area of Burnt Tavern Rd. and Lanes Mill Rd. They identified the driver, Louis Vargas, 43-years-old of Manchester, and the passenger Eli Brown-Casalan, 42-years-old of Lakewood.

After searching the vehicle, police found Cocaine, Marijuana and Paraphernalia, resulting in both subjects being arrested.  Detected also discovered that Brown-Casalan had an active warrant for his arrest for $1336.00 out of Brick Township.

Later that day, SCU Detectives discovered suspicious activity in the area of the construction zone on Burnt Tavern Rd. and Van Zile Rd. Two vehicles were found speeding in separate directions and eventually were stopped by detectives.

Officers stopped Adrian J. Woodward, 33-years-old of Manchester in the area of the Brick Reservoir after observing multiple motor vehicle violations. Investigation led to finding 34 grams of cocaine, 82 grams of marijuana and packaging materials for the resale of the drugs.

The other driver stopped on Van Zile Rd. was identified as Madison Struyf, 20-years-old of Brick. Strufy was arrested after Officers discovered drugs and was issued a Summons for Possession of Marijuana, Possession of Paraphernalia, Possession of Gabapentin, Possession of Fraudulent Government Documents and multiple motor vehicle violations. 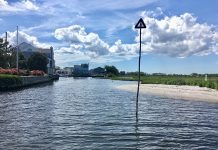