BEACHWOOD – A massive blaze tore through a Beachwood home early Saturday, displacing a police officer and his family and injuring the officer’s K9 partner.

WOBM first reported that the home on Ship Avenue belonging to a Pine Beach police officer broke out at around 1:30 a.m.

The house is a total loss but thankfully, the officer and his family were able to escape without injury.

The officer was identified on Facebook as Russell Okinsky. His K9 partner Keto is now being treated at veterinary hospital that was inside the home at the time of the blaze.

Lola, a family dog, had to be euthanized after her injuries were determined to be too severe.

According to the Beachwood Volunteer Fire Company, one firefighter suffered a minor injury while battling the fire.

The cause of the fire, which is unknown at this point, is under investigation by the Ocean County Fire Marshal’s Office and the Beachwood Police Department.

The outpouring of support has started with many in the community wanting to help.

Monetary donations can be mailed to the PBA #253:

A Facebook post from the PBA assures everyone that 100% of all donations made will be given to Officer Okinsky and his family. 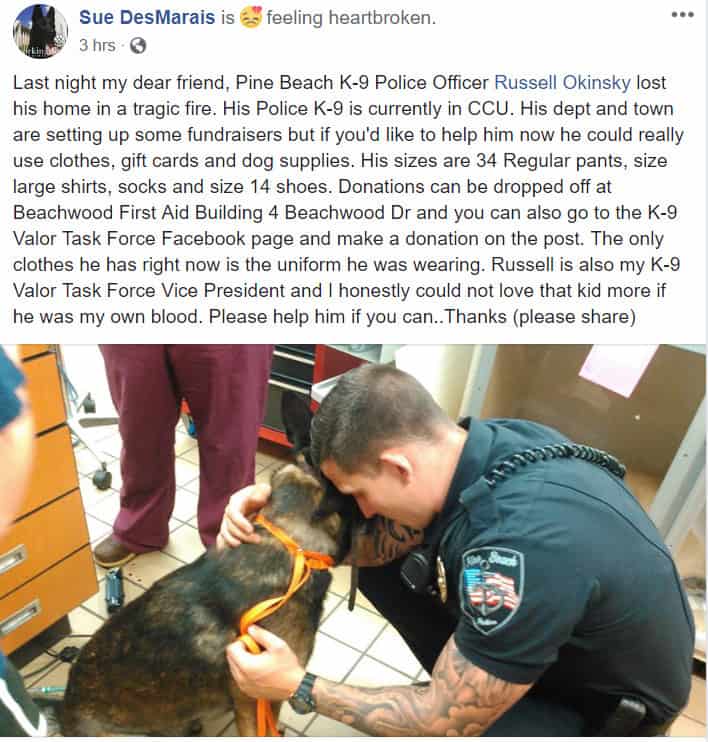