TOMS RIVER – Police and fire crews had their hands busy Wednesday night after a vehicle burst into flames in a township shopping center.

Exit 82 Scanner News and Ocean County Scanner News were first to report the blaze in the 10 o’clock hour at the Crossroads Center off Route 37 near Staples.

Rescue Engine 2561 arrived first on the scene and extingusished it along with members of Engine 2631 and Engine 2671.

According to photos taken at the scene, the vehicle appears to be a mini van.

No one was injured and according fire officials, the investigation into the cause of the blaze is now being conducted by the Toms River Township Police Department.

Flames and smoke could be seen billowing for several miles causing some minor traffic backups and rubbernecking on Route 37. 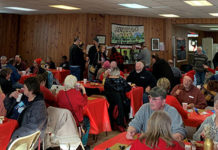