TOMS RIVER – Although it’s months away from election day, three local politicians are mulling a run for mayor, and development and taxes seem to be on their minds.

Mayor Thomas Kelaher’s term is up at the end of the year. He has not formerly announced his candidacy. Council members Maurice Hill and Daniel Rodrick have both expressed interest in the spot.

Hill said he will screen the local Republican club to see if there’s support for him to run. “I’m optimistic they’ll select me,” he said.

“I screened last time, too,” he said. Ultimately, in that race, the nod went to current mayor Kelaher to run again. If the same thing happens, he said he wouldn’t challenge the party’s decision, and wouldn’t fight in a primary election.

He had also screened twice for Congressional openings, he said. “I’m very interested in moving up.”

“Tom has done a good job for 12 years,” he said. “There’s some changes that could be made and I think I’m the one to do it. I have the time and energy to do a good job as mayor, now that I’m retired,” he said.

“Very honestly, I haven’t made up my mind,” he said. “Certainly, I like being mayor. I think I’ve done a good job. I have the management philosophy of ‘Surround yourself with good people and get the hell out of their way.’ ”

Meanwhile, Councilman Daniel Rodrick said he was asked by the club to screen. He feels like he has a lot of support in the club as well.

Rodrick won a spot on the council in 2017 running as a Democrat. He changed party affiliation a few months ago, going back to being a Republican like he had been in the past.

“Development is the Number 1 issue, along with taxes,” he said. “We’ll have to work extra hard to cut the fat in town.”

With the Toms River School District fighting a substantial loss in state aid, many fear an increase in school taxes. Rodrick said he didn’t want to compound this with taxpayers by also raising local taxes.

When it comes to development, council members are constantly discussing purchasing land to keep it away from developers, he said. When he ran in 2017, a large part of his campaign had to do with fighting development.

Hill has said he’s been on the front lines fighting requirements that Toms River allow more housing. Every town is required to build a certain number of homes for affordable price ranges.

The goal now is to redirect those homes away from the northern portion of town, which is becoming crowded, and plan them for the downtown area, he said. The town bought the Red Carpet Inn, because it had a history of drug use. And the Post Office building is in a bad spot. Those two buildings might be coming down.

There’s a portion of land off Caudina Avenue, near Hooper Avenue, where the town is hoping to reposition the Post Office and a new Veterans Administration clinic. If the federal government approves those spots, it will be a huge win for the township’s services and veterans, he said. Then, it would open the downtown for new shopping centers with apartments over them.

As of yet, no Democrats have publicly announced a run for mayor.

VIDEO: The Grinch Gets Busted, Christmas Is Saved 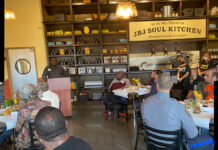