BEACHWOOD – For the first time in a long time, Beachwood was quiet on July 4.

Usually, the town fills up, parking is worth more than gold, and everyone claims a spot so they can look up to the sky and watch the annual fireworks display.

But that didn’t happen this year. The fireworks vendor was not able to ship the fireworks.

Mayor Ron Roma put out a press release stating that the company that was to provide the show, Fireworks Extravaganza, did not have staff with licenses to transport explosives on that day.

Officials have said that the fireworks show over the Toms River on July 4 can’t be rescheduled.

“It was such a sad thing. No one was expecting this,” said Councilwoman Beverly Clayton, who chairs the fireworks committee. 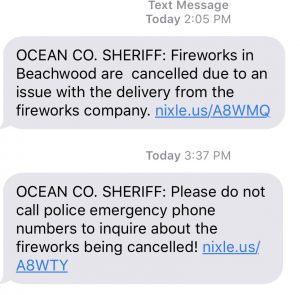 When the fireworks didn’t arrive, people started to get concerned. They couldn’t get official word that they were not coming until later, she said.

This would have been the 78th year that the fireworks would be held, she said. In future years, this will be a black hole in the record.

“People don’t understand what goes into this event,” she said. Dozens of employees and volunteers worked together in a coordinated effort for months around a fireworks show on July 4, only to have it be canceled at the last minute.

Multiple agencies are involved, including state police, the Ocean County Sheriff’s Department, local police and government officials, fire departments, first aid squads, Office of Emergency Management, junior explorers, and public works, she said. Even the number of workers and volunteers from Beachwood that were all hands on deck was high, but other towns along the Toms River also have to prepare for it.

Even if the company reimburses the cost of the fireworks show, there is other money that was put out: paying employees on a holiday, and for their work on the days leading up to it.

“They truly did us a disservice,” she said.

Kevin Williams, a member of the fireworks committee, posted about it on WOBM.

“Fireworks in Beachwood are a source of pride to the borough and done with great effort and contributions from the police and public works departments as well as volunteers from fire and first aid squads. There is also tremendous coordination with surrounding towns, the State Police and the Coast Guard, something that is done over months. For that reason you simply can’t re-schedule the show.

“The fireworks show is put on with donations from the public and business community, WOBM among them.  Obviously the fireworks committee along with the borough of Beachwood will demand a full refund of the $17,000 paid for this year’s show and will put that money back into the trust that has allowed for this 4th of July tradition to continue for decades,” he said.

Fireworks Extravaganza, of New Rochelle, was scheduled to put on shows at several other venues. They were not able to get to Beachwood and Milltown.

The president of Fireworks Extravaganza, John Sagaria, posted an apology to the people of Beachwood and Milltown on the company’s Facebook page.

“A perfect storm of events took place, and we were unable to get the product legally to your site. It was all about the delivery. The product was there, the lead shooters ready, and everything was a go. But we had a problem with the driver that was delivering the shows. Many regulations are in place for transportation of explosives and this is what failed. Any other day, other than the actual 4th of July, we could have made changes and gotten around it, but yesterday we could not. It was a failure, but also a failure of not having a strong enough “Plan B” in place for yesterday. And we simply ran out of time. This failure is my fault, and the development of a powerful “Plan B” is my responsibility. And for this I am sorry. This is the first time ever in hundreds and hundreds of shows per year over a span of 10 years that this has taken place.

“I have won competitions all over the world, and up until yesterday that is what people know me for in this business. But today is a new day and we failed you. I want to do whatever I can do to make up for it, correct it and be responsible for it.”

Sagaria pledged to do whatever it takes to make it up to the two towns.

“I love to light up the sky and tell a story. It is the reason why hundreds of towns put their trust in us. But last night the skies over Milltown and Beachwood were dark. I always talk about fireworks displays making your heart smile. But last night in your township there was none of that, and my heart was broken,” he wrote.

Water Mains To Be Replaced In Toms River Neighborhood