OCEAN COUNTY – There was tons of excitement around the region as Chef Gordon Ramsay came to Toms River this week to makeover a restaurant for his hit TV show.

Now, rumors are flying that he’s not finished with the Jersey Shore and may be hitting another restaurant and town tomorrow.

Jersey Shore Online received a few anonymous tips on Tuesday saying that Ramsay will be heading to Manasquan on Wednesday but they weren’t any more specific than that.

Now granted, this could be a load of bunk and we can’t really confirm if this is true – but it’s still cool to think that another Jersey Shore town will get exposure on international television – not in the way Snooki and the gang did – and another shore eatery can benefit from a world renowned culinary master’s assistance.

For the second time this week, we attempted to question a FOX spokesperson who once again, denied to comment and thanked us for our persistence.

On Tuesday, trucks were parked outside Caneda’s White Rooster restaurant on Fischer Boulevard after Ramsay and his team revamped the place for his hit series “24 Hours to Hell and Back.”

On Tuesday night, Townsquare Media, which owns several radio stations in New Jersey including WOBM and 105.7 The Hawk, had posted a more up close photo of Ramsay in Toms River. Special thanks to Ken Gaughran for use of the pic.

We will keep you posted if we have another Chef Ramsay sighting.

If you saw him or were part of the taping of his show at the White Rooster, email us at news@jerseyshoreonline.com 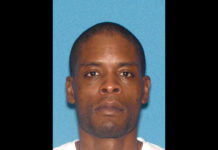