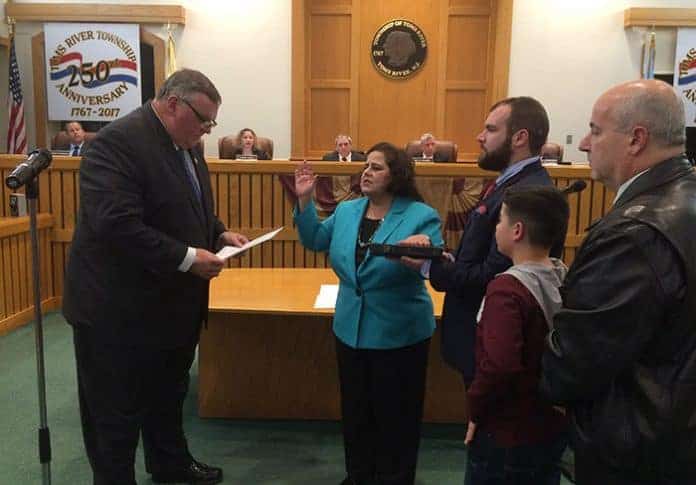 TOMS RIVER – The first bipartisan Township Council in years organized at the beginning of January to set the course for 2018.

The governing body had been all-Republican last year, and for several years previous. Three Democrats won spots on the council during the November elections. Laurie Huryk, Daniel Rodrick, and Terrance Turnbach were sworn into their new positions. They were seated on the dais in such a way that no two Democrats were seated together.

Each member got a chance to give comments, which at times became emotional, as they looked back on the previous year and planned the next one. Many of them spoke about working in a bipartisan manner going forward.

Maria Maruca, the one Republican who won her re-election, said that this is going to continue to be a rebuilding year for the shore, as Superstorm Sandy projects are still being completed. She was sworn in by Assemblyman Gregory McGuckin (R-10th), a former councilman.

The four council members thanked their supporters and promised to be receptive to residents.

“People who know me, know I decided to run to do the right thing for the people of Toms River,” Huryk said. Although a Democrat, she was sworn in by Mayor Thomas Kelaher, a Republican.

“It’s important to listen to the residents, and that’s what I’m here to do,” Turnbach said. He was sworn in by Ocean County Superior Court Judge Francis R. Hodgson, Jr.

One of Rodrick’s comments was directed to his fellow council members. “When we agree, I’ll support you, but if we disagree, I’ll be steadfast in my opposition.” He was sworn in by Brick Mayor John Ducey.

During re-organization meetings, appointments are made and people are chosen to head up groups. Both Republicans and Democrats agreed on Councilman Brian Kubiel to be the president of the council for 2018.

“Today, we begin a new year with optimism,” he said. “Together, we will move forward collaboratively.”

They disagreed on the appointment for vice president. The Republicans wanted Councilman George Wittmann Jr. and the Democrats wanted Rodrick. Republicans still outnumber Democrats 4-3, so Wittmann was sworn into that position.

Huryk appeared surprised when Councilman Maurice Hill nominated her for the council spot on the Planning Board.

“Laurie represents Ward 3, and that’s where most of the development is,” Hill explained. “I enjoyed my time on (the Planning Board).”

Huryk struggled a bit with the time constraint of an additional two meetings a month, and looked to her family in the audience before agreeing to the position.

Councilman George Wittmann Jr. read a list of goals for 2018, including banning the sale of marijuana, addressing building department complaints, and increasing inspections. He suggested appropriating $40 to purchase up to 200 acres of open space. This would be funded through an referendum to increase the open space tax as well as grant money.

He wanted to have an analysis of the sewer system in town to see if it can support the development that is growing. He also wanted to see the legality of a moratorium on construction approvals until that analysis is complete.

During the public portion of the meeting, former Mayor Paul Brush commended the council members for their civil conduct toward each other.

“The town relies on you to do the right thing, regardless of your politics,” he said.