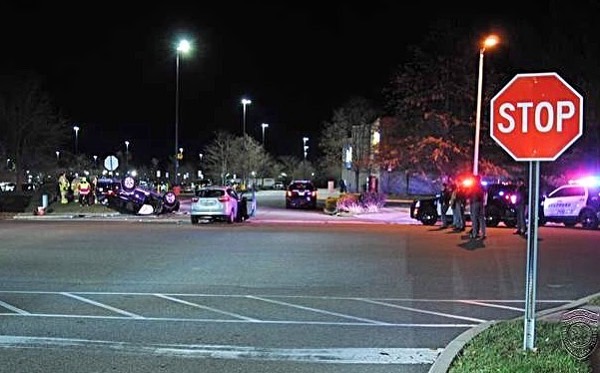 STAFFORD – Two people suffered injuries after an accident on Black Friday outside a busy shopping center, according to police.

Stafford Township Police responded to the scene outside the WalMart off of Route 72 on Martin Truex Jr Boulevard just after 10 on Friday night.

Authorities say 52-year-old Adrian O’Brien of Toms River was exiting the BJ’s Wholesale parking lot and crossing over Martin Truex Jr Boulevard towards the WalMart when her vehicle was struck by a 2013 Ford CMX operated by 72-year-old Robert Francis Jr of Little Egg Harbor who was traveling north on the boulevard.

At impact, O’Brien’s vehicle began rotating clockwise until the vehicle tipped over, ending on its roof within the driveway of the WalMart.

Francis sustained a head injury and was airlifted to Atlantic City Trauma center by Robert Wood Johnson Life Flight, where he is currently listed in stable condition.

O’Brien sustained a back injury and was transported to Southern Ocean Medical Center by Stafford EMS for treatment.

The collision is currently under investigation by Patrolman Justin Pascale.

Anyone with information or witnesses to the crash should contact Stafford Township Police at 609-597-8581.