BARNEGAT – Breanna Miccolo never expected that instead of buying Christmas gifts for her son, Corey, she would be returning to his school to bring gifts in his memory.

“Corey enjoyed buying gifts as much as liked receiving them,” shared Rebecca Miccolo, Corey’s maternal grandmother. “We would always go overboard in buying him gifts and since we don’t have Corey to buy for, we figured we’d do something in the community where he last lived.”

The idea caught the attention of other people who also wanted to do something for the six-year-old whose tragic death made no sense. People continue to send gifts for delivery to the Cecil C. Collins School in Barnegat. Breanna and a group of supporters have already dropped off 320 toys for distribution to other children.

Corey died suddenly in April of this year at Southern Ocean Medical Center. The medical examiner listed Corey’s cause of death as “blunt force injuries with cardiac and liver contusions with acute inflammation and sepsis.”

How Corey’s six-year-old body sustained the horrific injuries leading to his death remains “undetermined” according to authorities. Breanna suspects she knows who was behind the harm to her son and hopes the Ocean County Prosecutor’s Office will bring charges sooner than later.

A video removed from the Atlantic Heights Apartment complex depicts Christopher Gregor putting Corey on a treadmill and speeding it up on March 20, 2021. After the young boy fell, Gregor returned him to the treadmill and bit him on the head. Gregor is Corey’s father.

Although Gregor faces charges for child endangerment related to the incident, the prosecutor’s office has not claimed that his actions resulted in Corey’s death. The matter was referred to a grand jury after Gregor’s most recent court hearing. 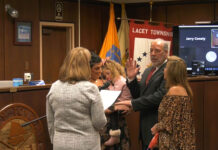