In one situation on Cindy Lane, it appears that the grading of a property was raised with a new house being built, resident George Feldner said. As a result, water runs off into the street. He wondered how something like that would be allowed.

Mayor John Spodofora asked the township administrator, James Moran, to send the engineer out to look at it.

Moran said the town will look at the permits that have been issued, and see if they are appropriate, and if they match the work that has been done.

Additionally, there are triangles in that section of town where roads intersect at strange angles, and the drainage is inadequate. Resident Richie Gilchrist noted one on Walter Boulevard, where it is crossed by Jennifer Lane, and several other streets.

“I understand the amount of rain we’ve had,” he said, since this was right after the Nor’easter. However, he said that it floods even during moderate rains.

Another resident, Bill Quinlan, said there was an area in Beach Haven where there were natural plants that absorb the water. Perhaps the triangles could be modified to be like those areas.

“It’s a little more involved to get it started,” he said, but there is little maintenance afterward. It would also prevent some of the ice puddles when the weather turns cold.

“The town’s landscape architect is working on a plan for that as we speak,” Moran said. 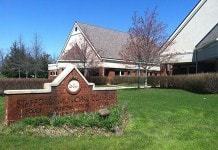