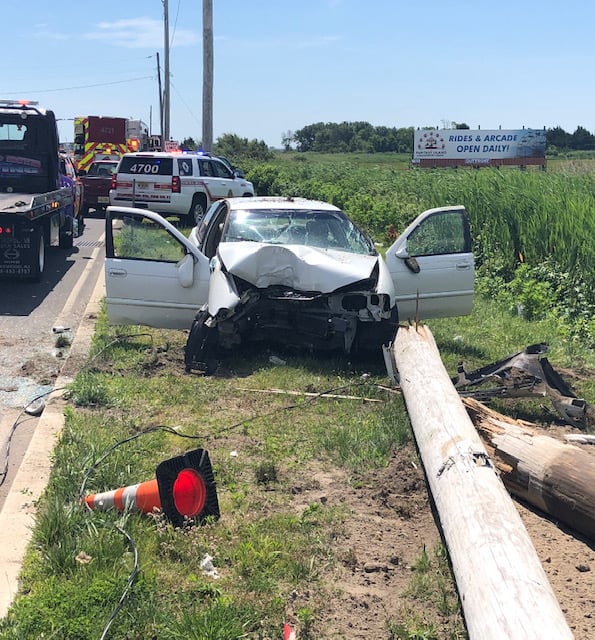 STAFFORD – Police are on the lookout for a dog that ran from the scene of an accident that occurred earlier today on Route 72 near the Causeway Bridge.

At approximately 10:50 a.m. on June 24, Stafford Police responded to the area on Route 72 for a report of a single vehicle crash.

According to police, 23-year old Gabrielle McMillan was traveling east on Route 72 in a Nissan Sentra near the bridge when she lost control of her vehicle. The Nissan then left the roadway and struck a utility pole, rolling over.

Emergency personnel arrived shortly after the accident and provided McMillan with medical treatment before transporting her to Atlantic City Trauma Center by MONOC 1 for further medical evaluation. Police report that McMillan sustained non-life threatening injuries in the crash and was wearing her seatbelt at the time of the incident.

McMillan’s vehicle sustained significant damage and had to be towed from the scene.

During the crash, McMillan had a dog in her vehicle, which ran from the scene and has yet to be found.

Members of the Stafford Township Police Department, Bureau of Fire Prevention, Animal Control and other agencies are now looking for McMillan’s dog, described as a Boxer/Rottweiler mix.

“The family members of the driver are present and assisting in the search as well. The police are currently using a drone in attempts to locate the dog along with other resources,” stated Stafford Police. “Please do not stop or pull over on Rt. 72 and attempt to join the search. We have enough search and rescue members on site, and we do not need another serious accident in the area.”

Multiple Crashes On Route 9 In Ocean County, One Injured