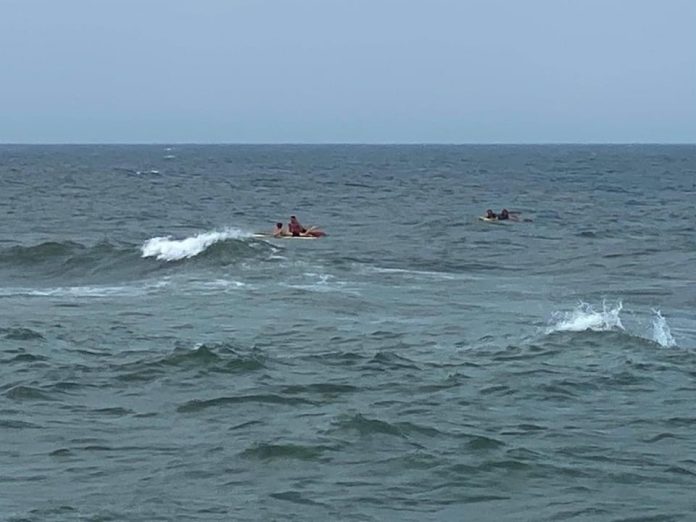 SURF CITY – The pilot of a plane that crashed into the sea off Long Beach Island was rescued by two sharp eyed lifeguards on June 27.

The pilot is doing okay but he had to be rescued from the surf around 3:30 p.m. and brought to the 13th Street beach.

There were cheers by several sun bathers one of whom caught the crash on his cell phone in a short video.

Surf City Police responded to the beach on a report of a plane crash and Patrolmen Costabile and Rible arrived on the scene and located the small yellow banner plane.

The pilot of the plane was towing a banner sign at the time it went down. One witness noted that he heard the plane’s engine sputter before it descended into the surf.

The plane is believed to have been traveling northbound along the coast according to a witness.

His plane went down on an angle towards the ocean and dropped its banner before crashing into the sea with a sizable splash according to witnesses.

Surf City lifeguards Scott Meggitt and Charles Orborne moved quickly rescuing the pilot. They brought him back to shore.

The pilot was treated by Surf City Fire Company and EMS and transported to Southern Ocean Medical Center in Stafford Township.

The cause of the crash remains under investigation by Surf City Police and the Federal Aviation Administration.